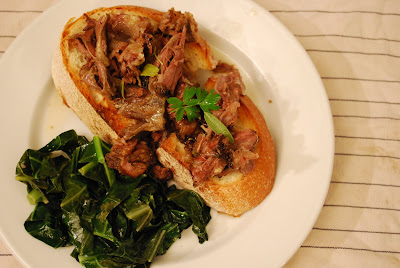 I keep reading on the internet that oxtails used to be considered throw-away meat and that butchers would give it to you for free if you asked. I have trouble believing that because:
1) In A Tree Grows in Brooklyn, the girl’s mother gave her money to buy tongue and other cheap parts, so it’s kind of hard to believe butchers would give away stuff that they could just sell really cheap.
2) Maybe when the country struck it rich in the 50’s, people could afford steaks and tenderloin and didn’t want oxtail at any price, so butchers would give it away free, but it seems like by then the food business was industrialized to a point where not a lot went to waste. You’d think things no one would buy would end up in hot dogs or dog food or where ever meat byproducts go before someone would get it for free.
3) Oxtails taste pretty good. They take some time, but it’s hard to believe people ever considered them trash.

I’ve made oxtails a few times now and I’ve come by some knowledge the hard way. First, they’re incredibly rich. A little too rich for my taste, so I cut off a lot of the fat before I cook them. For the braising liquid, I think any kind of broth is too heavy, so look at something like beer, a dry red wine, or even just plain old water. Serve them with a green vegetable, too.

Second, they take a really long time. I set aside at least 6 hours to braise them, but it’s taken as long as 8. But once, they get going, you really don’t need to do much to them. One option is to start them the day before, refrigerate, and finish them on the day of. One advantage to this, is that it’s easy to skim the fat off when you take it from the fridge.

The end result is a really flavorful, rich, and tender meat, that I like to serve with some of the braising liquid over thick slices of bread. 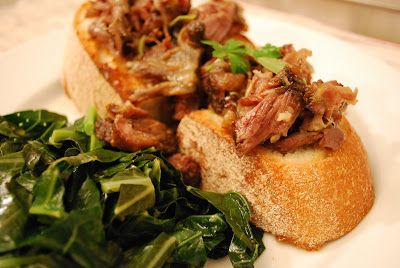 – Rub the oxtails with salt and pepper.
– Heat a little oil in a dutch oven.
– Brown the oxtails on high heat on all sides and remove to a bowl.
– Turn the heat to medium, drain off some of the fat from the dutch oven, and add the onions. Stir occasionally until they are soft, about 8 minutes.
– Add the carrots and celery, cook for a minute and add the beer.
– Add the thyme, bay leaves, and mustard, then return the oxtails to the dutch oven.
– Bring to a boil, turn the heat to low, and cover.
– Braise for 6-8 hours, adding liquid if it gets low, turning the oxtails over now and again.
– When the meat is falling from the bone, remove the oxtails to a cutting board and strip the meat away from the bone (set aside to use for beef broth later). Chop the meat, place in a bowl and cover with foil.
– Skim the fat off the braising liquid, then pour through a strainer to filter bits of bone and cartilage.
– Combine the meat and braising liquid in a bowl.
– Serve over bread or potatoes and for God’s sake eat some vegetables, too.