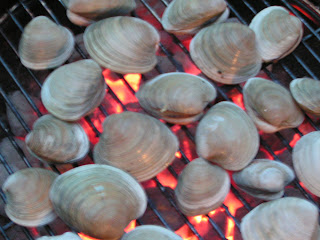 One of my New Year’s resolutions this year was to really improve my seafood skills. It has been less successful than my resolution to address every rate verifiacation query at work as soon as the request is entered into the database. I’ve been doing a good job with that and it really makes them easier to deal with when you don’t them pile up. But you know all about rate verification requests, so I won’t bore you with that. With seafood, though, I just can’t bring myself to put in the time and effort to master cooking a delicate fish so it’s not falling apart.

Fortunately, grilled clams, which we had on Saturday, require almost no time and effort. They fall between Chef Boyardee Ravioli and ramen noodles on the list of difficult dinners to make. Here’s the recipe:

2 dozen or so clams
butter

Scrub off the clams. Light the grill and let it get hot.

Dump the clams on the grill, pull each clam when it opens. Eat them and note that they are incredible. 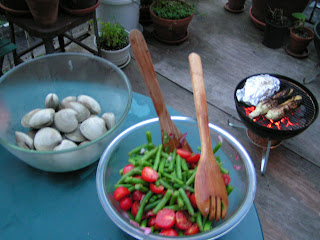 With the clams we had foil pack potatoes. We used to make these in Boy Scouts with a big wad of ground beef in there, too, but we would cook them in the campfire embers. It works fine on the grill without the wad of meat (Which is probably advisable. I don’t have any specific memories, but I would imagine that the meat gets pretty well done by the time the potatoes are cooked.) Here’s how you do it:

– Slice up some potatoes and chop an onion. Lay them on a sheet of foil.
– Put a few pats of butter and some salt and pepper on the potatoes and onions.
– Take another sheet of foil and put it on top.
– Roll up the edges of the two sheets of foil, so you have a pretty airtight package.
– Lay the pack on the grill, not over totally hot coals (even though that’s what I did in the picture and it turned out fine, just a little crispy on the bottom).
– It’s done in about 20 minutes.
– Then your dad tells a ghost story about this guy who lived right near here a hundred years ago. He didn’t have a foot, so he had one carved out of wood, but it would wear out too fast, so he had one carved out of stone instead. Everybody made fun of him for his stone foot, so he went crazy and killed people by kicking them with his stone foot (I think.). He was put to death, but if you listen closely, you can still hear him dragging his stone foot. 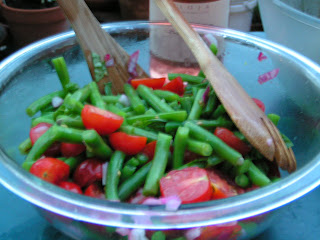 Elizabeth made a green bean and tomato salad. I was busy with the grill, so I don’t know what all went into it, but it was really tasty. I didn’t have high hopes for the green beans because they’d been kind of forgotten in the fridge for a while, but they were crisp and green and fresh. The tomatoes were from our garden which always fills me with a sense of pride even though my personal contribution to the garden is pretty negligible and consists mainly of hooking the hose up to the sink, turning it on and passing it to Elizabeth.

Also, I should mention that this week has been grill week and we are grilling every night until we run out of stuff to grill. So now you have something to look forward to in life.