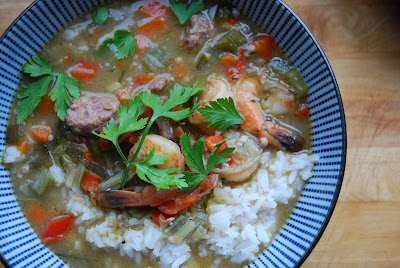 We already have a recipe for gumbo (kind-of) on the site, so I didn’t really want to make gumbo because I wanted to do something new. But then, somehow we came into possession of a pound or so of shrimp that ended up in the freezer, and then a couple days later some andouille made its way into the fridge. Then the baby had her birthday and I didn’t make it to the farmers’ market on Saturday, so I went into Manhattan to the Union Square one during the week, and there was some okra cold starin’ at me. And it just so happened that the last time we’d had shrimp, we saved the shells in the freezer for a future shrimp broth, so this gumbo forced itself into existence. I didn’t have much choice in the matter. So here’s another gumbo recipe. This one is a little more labor intensive but totally worth it. Sometimes, you’ve got to listen to the okra. 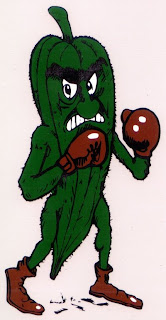 Gumbo is best the next day, so plan on making this the night before if you can. Also, to keep the whole thing from being too much work for one evening, I made the shrimp broth the day before I made the gumbo (I’ll add a recipe for shrimp broth someday, but it’s just like any other broth, but with shrimp shells.). I don’t make a habit of starting dinner two days before I’m going to eat it, but it was great to have the broth all ready to go. If you’re not going to make shrimp broth, it’s fine, you can use chicken broth. But the shrimp broth makes it kind of special, if you have the time. Anyhoo, E just told me I bought the wrong kind of toothbrushes, so I’d better wrap this up. 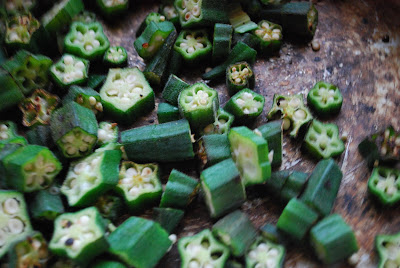 Gumbo with Shrimp and Andouille
serves 4-6

Chop the okra and saute it in a dry pan over medium high heat for 5-6 minutes. This makes it less ropey. Set it aside.

Saute the red pepper. Set this aside, too.

Slice the andouille on the bias and saute it. Make sure you do this one last, since it will get the pan totally greasy. You don’t have to cook it completely since it’s going to be simmering in the gumbo later, just brown both sides.

Make the roux. The roux is used to thicken the gumbo and it makes you feel like a real-deal cook but it’s also really easy. A really dark roux is more authentic, but that’s hard to do with butter and if you are like me, butter is the kind of fat you have lying around. So, over medium low heat, melt the butter in a good size pan. Slowly whisk in the flour. Whisk it every so often so the butter doesn’t burn and wait for it to get light brown. Turn the heat up a little if you need to. Now add the celery, carrots, and onion to the roux. Keep this over low heat.

Put the broth and a half quart of water into a stock pot or Dutch oven. Bring it to a boil.

Add the sausage, red pepper, chile peppers, roux, the madeira, and okra and reduce heat to low. Add salt and pepper to taste. Simmer for 20 minutes.

Add the shrimp. Wait five minutes and turn off the burner (you probably don’t have to wait five minutes, but people get squeamish about seafood) . Cover it and let it sit there until it is cool enough to put into the fridge.

Leave it in the fridge over night. When it’s time to go, take it out and heat it up. Serve it with rice.