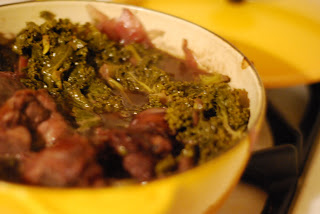 Since we last spoke Brooklyn Supper has been busily making food. First, we were home for the holidays and made butter cookies (twice), a gingerbread house (from a mix, but at least I hand-rolled the ginger bread), a pork roast, cauliflower gratin, and apple pie. Then, we came home and made not-so-great baked beans with pretty good cornbread. Don’t worry, I am determined to get you the perfect baked bean recipe in time for the Superbowl.

A couple days after the baked bean debacle, we stopped by a new butcher shop in our neighborhood, Marlow and Daughters, brought to us by the Diner guys. A butcher shop with a focus on happily raised, natural meats has been something sorely missing in Williamsburg, and we are glad to have an alternative to the farmer’s market. Sadly, they kind of ruined Brian’s long standing butcher shop idea. He was even planning on calling his totally hypothetical shop “Campbell and Daughters.” Now he will have to find some other post-office dream job. We thought they were going to be really expensive so we went there expecting to browse only. It turns out they have good meat and great prices (slightly lower than at the McCarren Park farmer’s market). So far we have purchased and enjoyed rosemary and red wine sausage, lamb shanks, a hunk of gruyere destined for mac and cheese, and a whole chicken. They have a small grocery and a few seasonal vegetables. We sampled some kale and it was surprisingly tender for this time of year.

Back to the lamb shanks. We were a little late in starting dinner since we had decided to braise, but really, we eat dinner at 10pm pretty regularly. I think I would be at home in Spain where 10pm seems to be the official dining hour. The shanks turned out well and would have been even better if we had given them an earlier start. We used turkey broth (frozen from thanksgiving) and red wine for the braising liquid. The shanks had an earthy, glad-to-be-home flavor. In addition, I had roasted some carrots in order to make this simple and delicious carrot soup. This led to a two bowl meal, with the shanks in a big bowl and the soup in a small bowl. This is not ideal from a presentation point of view, but who we are trying to impress? Except you, of course. 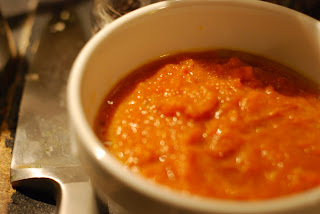 In a large saucier or small dutch oven, drizzle the olive oil and cook lamb shanks over medium-high heat, turning them to brown on each side. Cook time for browning should be around ten minutes. Set them aside. Saute the onions over medium heat until they are translucent and just starting to brown. When onions are almost done, throw in the kale and stir. Leave everything in the pot and add the shanks, broth, wine, herbs, bay leaf, salt, and pepper. Make sure the liquid is covering the shanks; if not, add broth, wine, or water. Bring everything to boil, then turn heat to the lowest low and cover. Simmer for three or so hours until the meat has shrunk up and is starting to fall away from the bone.

If you are pressed for time, cook on low for an hour and then turn heat up to medium low (look for bubbles, but not a full simmer), tilt the lid to allow the steam escape, and cook for another hour. Of course, the secret to a good braise is time, so any time compromised will lead to slightly tougher meat. 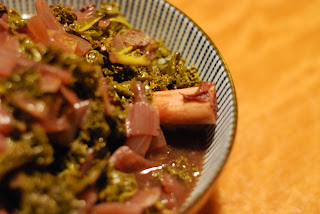