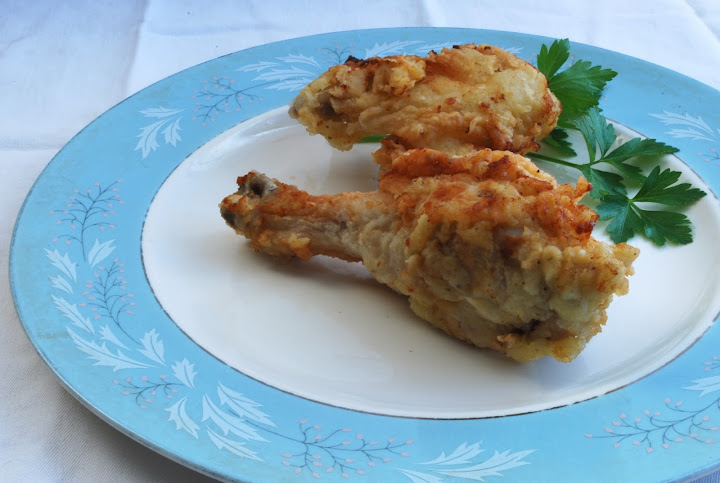 My grandmother, Mama E, died this summer. I asked if I could have her electric skillet, because I know that making fried chicken in it will always make me think of her. Mama E was a top-notch cook. I can still taste her chess pie, her fudge, and her pepper jelly. But I think anyone who knew her would say that her fried chicken was the best. It really was.

As a kid who grew up not in the suburbs but with a more or less suburban life, I didn’t always have a lot to talk about with a woman who grew up during the Depression and then worked in a textile mill. But as I got into cooking as an adult, I really enjoyed talking produce and cooking with Mama E. When I married Elizabeth, she loved to talk with Mama E about canning and gardening and baking. I’m glad that I developed my love of cooking and food and that I was able to grow closer to Mama E because of it.

The last week that I saw Mama E, she was very sick, but she was still talking about how the vegetables in her garden were doing. She joked on me for some brussels sprouts I’d ruined last Christmas and she talked about an apple-pear upside-down cake that Elizabeth had made that she’d really liked. It almost sounds too corny to say, but it’s really true that sharing food draws us closer to one another.

One of the things I admire most about Mama E was that she lived the kind of life she wanted to live. Even up until the end, she was independent. She said things about politics and pop culture that you didn’t expect from a woman in her eighties. She could have a wry sense of humor. She always drank a can of beer while she cooked. She visited New York for the first time after she turned 80 and she had a ball. Her children and grandchildren and great-grandchildren all loved her.

I made this fried chicken dinner in her memory, but I didn’t use her recipe. It was just a basic buttermilk fried chicken recipe (which is currently posted on babble.com) and in the end, her recipe was a pretty basic one, too. What made hers so good was all the practice she’d had making it over the years. I’m glad she had so much time to master it, I just wish she’d had a little more.