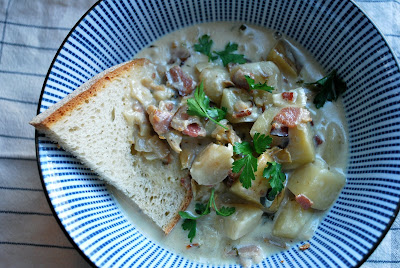 Every time I’m going to have shellfish I’m like “Is it that you’re not supposed to eat it in months that do have an R or don’t? Or is it ones that end in R?” Then I just eat it anyway. I just looked it up and, as it happens, you can eat shellfish whenever you want. It’s one of those things that got started somewhere once and probably made sense at the time like “March comes in like lion and out like a lamb” or “April showers bring May flowers” and you learn it and don’t really think about it, but then one day you’re sitting there in Phoenix and you realize that it doesn’t necessarily rain everywhere in April.

Clam chowder is one of those dishes people get uptight about (like barbecue) and insist that whatever they grew up eating is the only real clam chowder. Luckily, I’m not from a clam chowdery region of the country, so I can feel free to improvise. This one has a high bacon to clam ratio and it subs out some of the potatoes for Jerusalem artichokes which really taste nice with the bacon. It’s a rich, hearty, flavorful soup which makes it excellent for the cold weather (assuming it’s cold where you are.)

Clam Chowder with Jerusalem Artichokes and Bacon (adapted from Cook’s Illustrated)
serves 4 as a main course, maybe 6-8 as a starter

12 chowder clams (those are the really big ones, you can use two dozen of the normal-sized kind)
1 pint Jerusalem artichokes, peeled and cut into chunks
2 medium potatoes, cut into chunks
about a 1/2 lb. of thick cut bacon (less, if you’re not crazy), chopped
4-5 sprigs thyme
2 bay leaves
1.5 pints heavy cream (or use a pint and use milk for the rest)
1 large onion, diced
2 tbsp. all-purpose flour
salt
pepper
4 sprigs parsley, chopped
splash of madiera (optional)

– Steam the clams in a big pot. Pull them individually with tongs as they open, try to get them before they open all the way.
– Shuck the clams with a knife. Open them over a bowl and save the juice that comes out.
– Mince the clams.
– In big pot (To keep from messing up every dish you have, use the one you steamed the clams in. rinse it first.), cook the bacon over medium for about 5 minutes.
– Add the onion and cook until it softens, about four minutes.
– Add the flour and cook for another minute.
– Add the sunchokes, the potatoes, the bay leaves, the thyme, and the clam juice you saved. Simmer over medium low 10-15 minutes, until the potatoes and sunchokes are tender. The Jerusalem artichokes take longer, so when you test to see if things are tender, make sure you try one of them. If you don’t have enough clam juice, add just a little water.
– Dump in the cream, parsley, and clams (also the madeira, if you’re using it). You can use a little more or less cream depending on how your chowder looks to you. Gently heat it.
– Taste it and add salt and pepper if you’d like.
– Serve with bread.