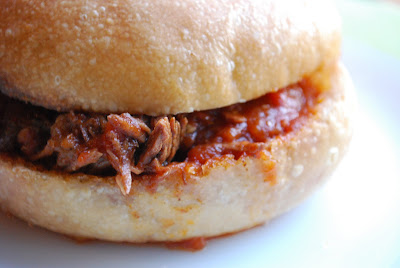 I love sloppy joes, but the name kind of sucks. I don’t think it’s a good idea to remind people that like half the meat is going to fall out the back of the bun as soon as you pick it up, and another quarter is probably going to spill out the front and onto your shirt, and if you do somehow keep the thing together, unless you wolf it down, by the time you get to the end, it’s going to have soaked through the bun and the whole thing is going to fall apart before you are done. In fact, it may be the worst sandwich name this side of “loose meat sandwich.”

The loose meat sandwich is like a sloppy joe without the tomato and I can’t think of a less appetizing name. At best, it sounds like its made from a slurry of undifferentiated animal parts. It’s also the kind of sandwich that Roseanne and her sister and Nancy sold at their diner on “Roseanne.” I wish that instead of remembering what Roseanne sold at her diner, the theme song to “Ducktales,” and Mr. Belvedere’s first name, I remembered things like the names of people I’ve met and which night recycling goes out, but that’s not the kind of person I am.

Anyway, these are fancy joes, because I like that name better and because they don’t use ground beef. I used chunks of beef stew meat from the butcher for this, so I don’t even know what cut it was, but anything good for braising will work. They are still pretty sloppy, so use a slotted spoon to serve them.

-Salt and pepper the meat and brown it on all sides on high heat in a heavy pot.
-Remove the meat to a bowl, turn the heat to medium, and add the onions. If the pot is dry, use a little olive oil.
-When the onions are translucent, add the tomatoes, one at a time, smashing them in your hand as you add them. Dump in about half the tomato juice and save the rest to add later if you feel like it. Return the meat and add the spices and honey. Turn the heat to high and when the liquid begins to boil, turn it to low and cover.
-Braise the meat in the tomatoes for about four hours.
-Serve on buns.