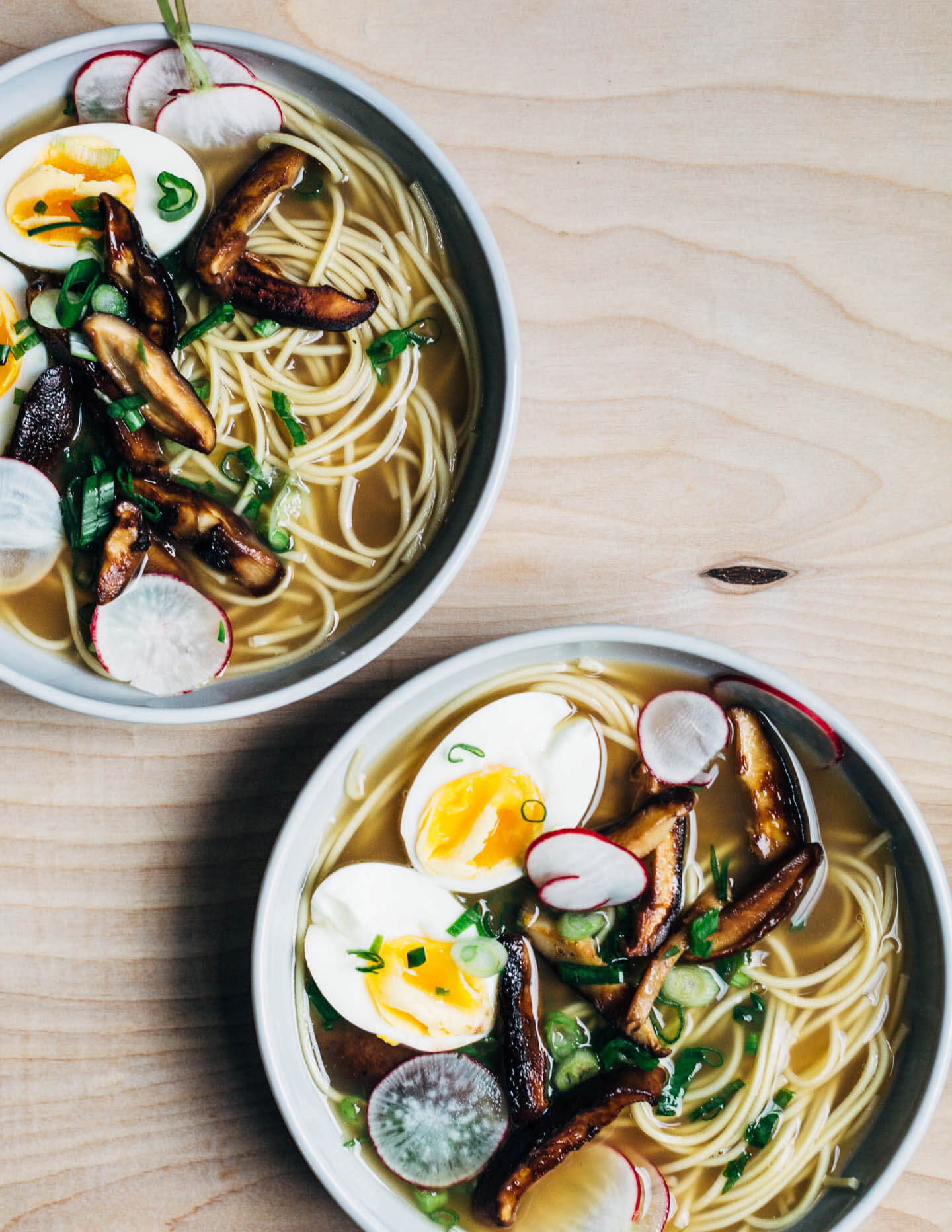 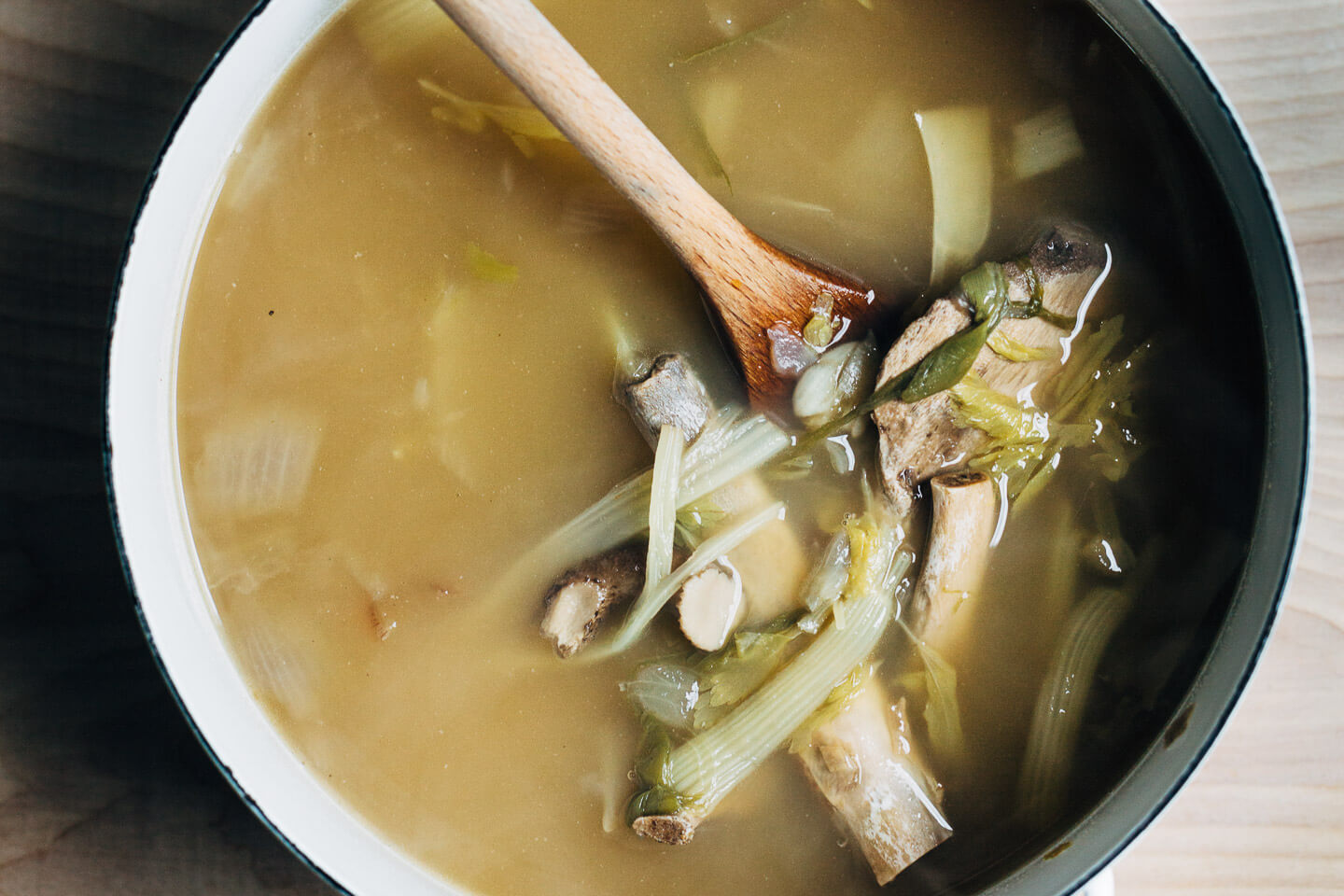 This pork bone broth recipe was originally published in April 2009, a time when Brooklyn Supper was in the midst of some lean times better known as the Great Recession. Since we find ourselves once again making do with what’s on hand and stretching our ingredients, I thought it was a good time to update the recipe. 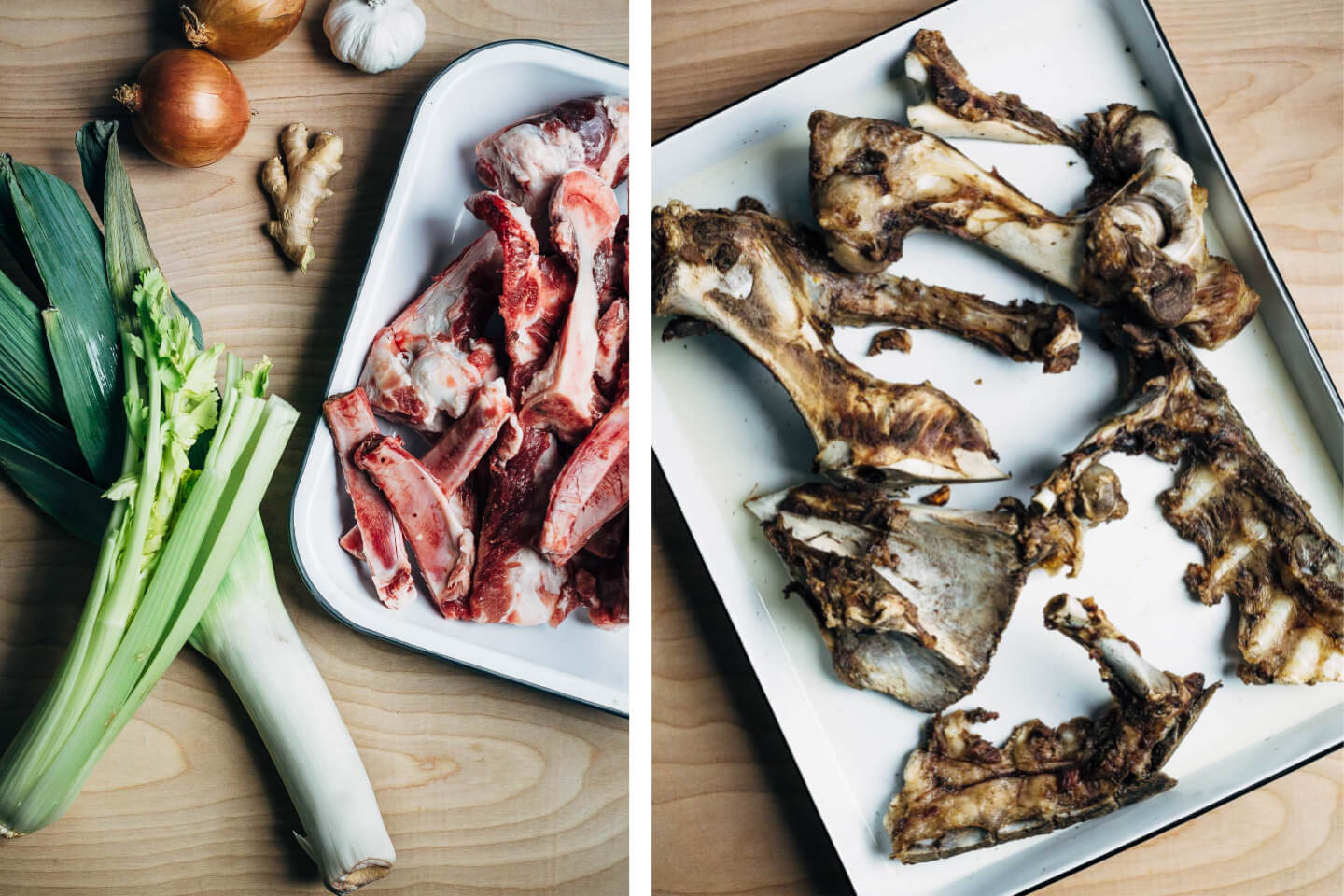 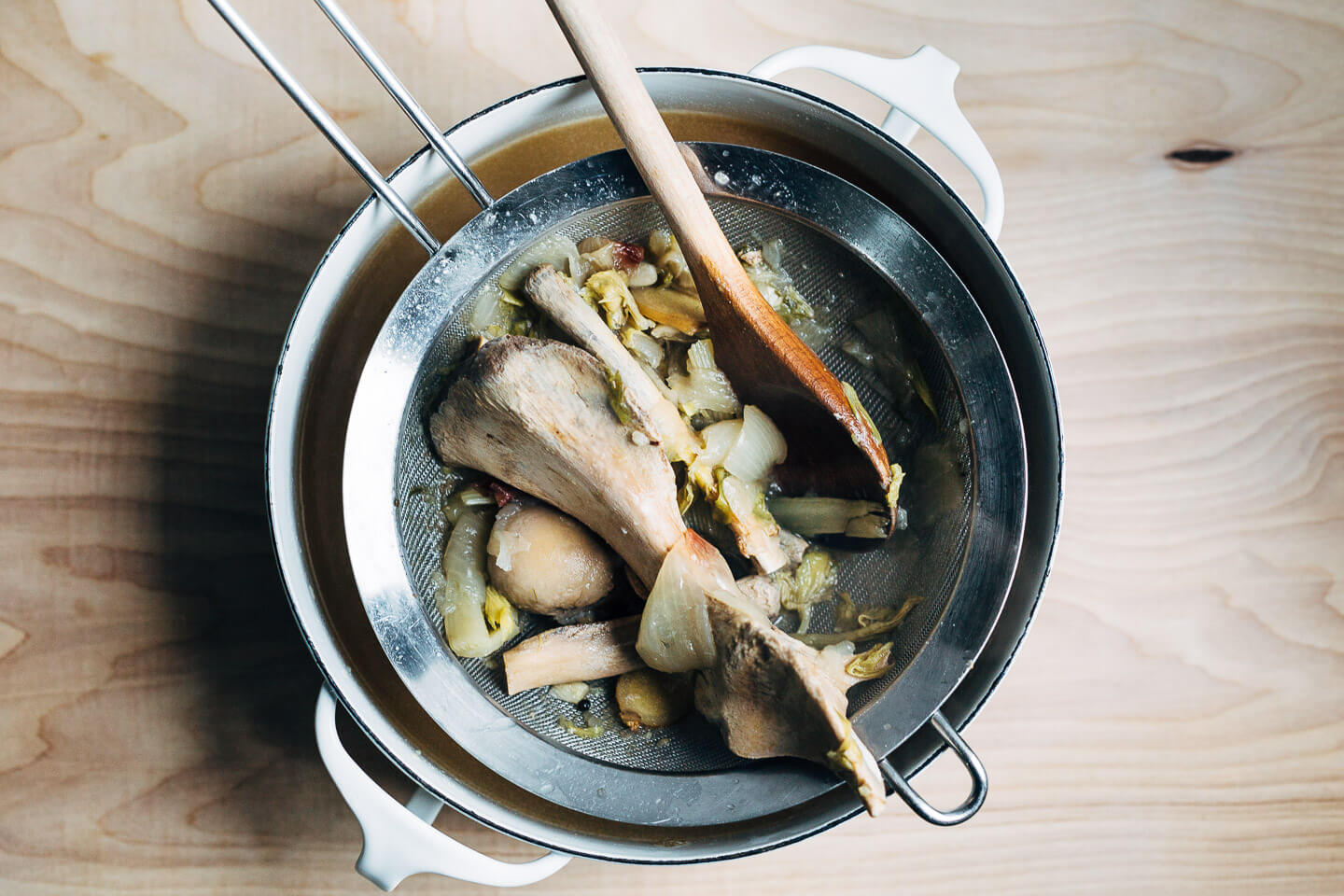 There are many, many ways to approach making bone broth. The original pork bone broth recipe published here was a casual way to repurpose a large quantity of pork bones – the kind you might have leftover from cooking a pork shoulder or have saved up in the freezer from multiple meals. This is the kind of bone broth I make most often. We save up chicken or pork bones and then use them to make a stock once enough have been accumulated. This simple approach is an important way to stretch animal ingredients and I’ve got a recipe for that approach below.

But first, a more traditional pork bone broth made from a mess of pork bones I picked up at my local butcher. This recipe is fussier and has a few more steps, but makes for a rich, delicately flavored broth that’s an ideal base for ramen or other soups where the broth provides the bulk of the flavor.

I started by blanching the bones and skimming the broth as they cooked. This step pulls a lot of the most unctuous components from the bones and yields a more refined-tasting broth. Next up, I roasted the bones – this step amplifies flavor and renders some of the fat. Finally, I stewed my bones low and slow in a big stock pot (the bigger, the better) with a mix of leeks, yellow onions, celery, garlic, ginger, and peppercorns. This last step can be done on a pressure cooker or on the stove. The stove top version produced a paler, more gelatinous broth, while the pressure cooker bone broth was darker and more watery (a thick liquid as opposed to the fully gelled stovetop version). Both were delicious and very flavorful, though I’d recommend opting for the stovetop version if time allows. 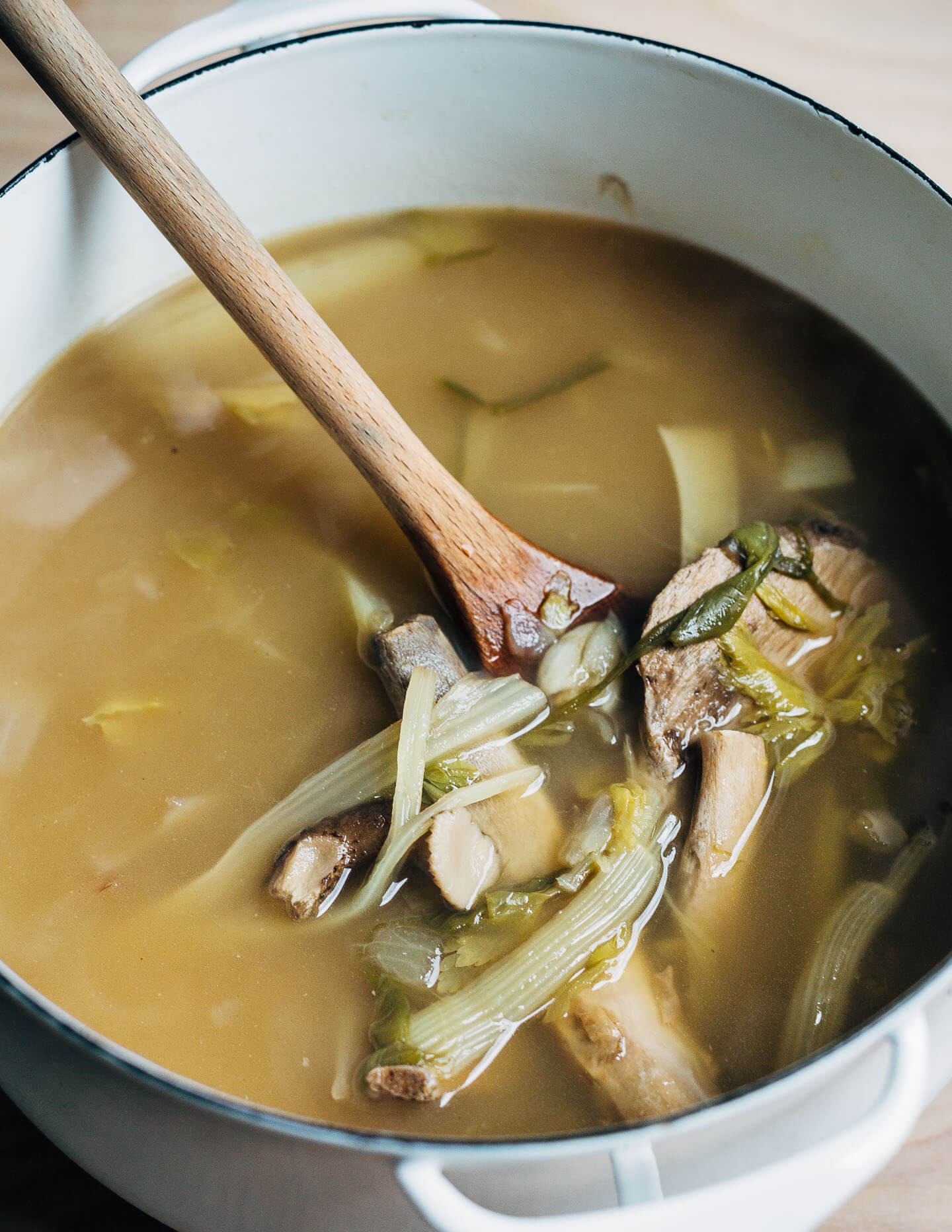 Serve your pork bone broth however you like. I added a splash of soy sauce and mirin to make for a simple, if exceptionally flavorful ramen broth. Other uses include a fortifying daily mug of broth, braising liquid, or as the base for sauces, stews, and bean dishes. 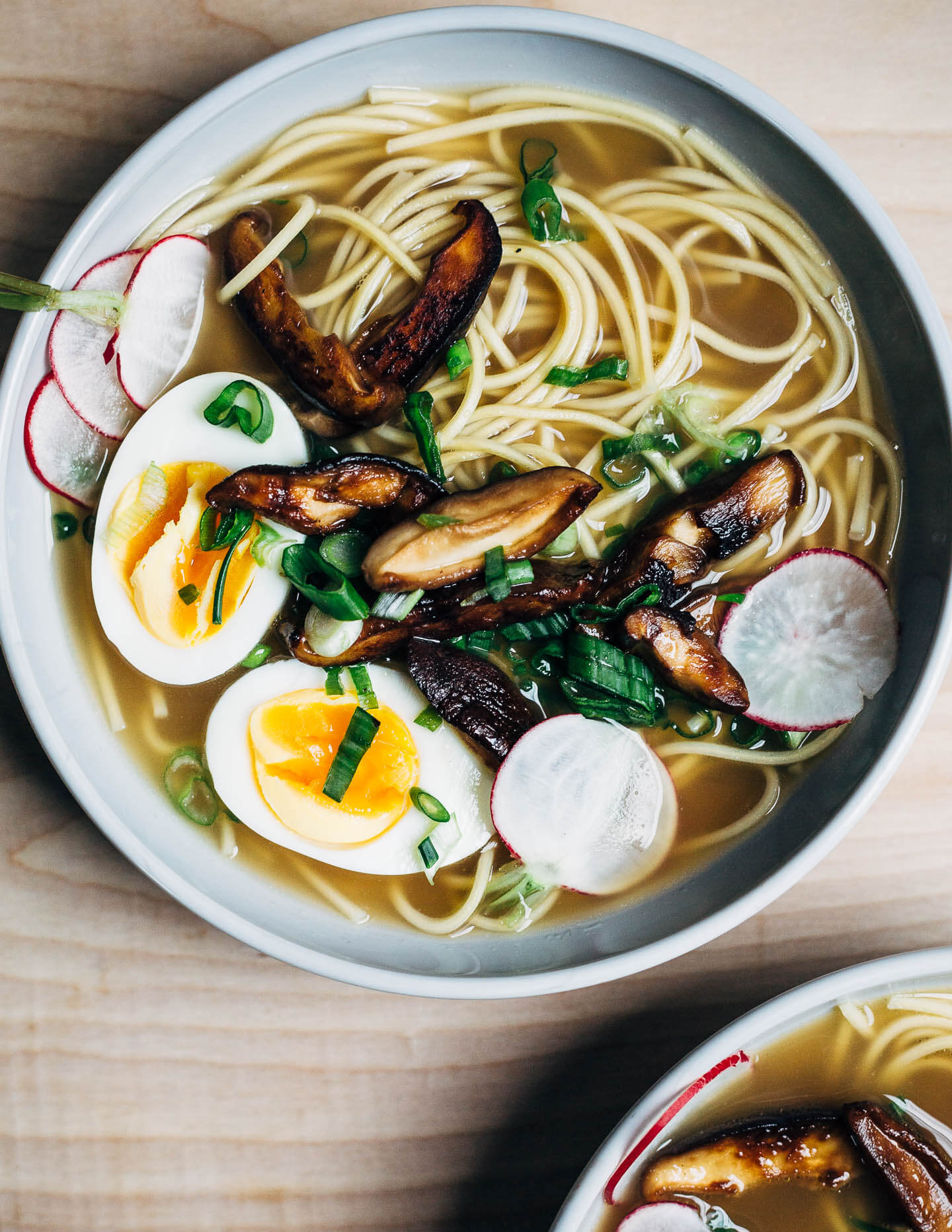 Note that the amount of broth you can make will be limited in the Instant Pot. If making a stovetop version, consider doubling the recipe to maximize your pork bone broth output.

Because of the long cook time for the stove top version, consider prepping and roasting the bones a day ahead and starting your broth first thing the next morning.