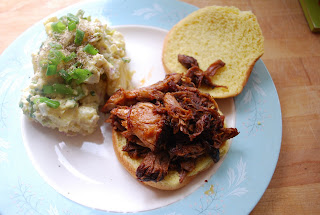 Q: How did the man stay alive on the desert island?

A: By eating the sand which is [sandwiches] there.

Of course, that man died. That may be hard for you to hear, but there it is. It was just bad luck that he ended up on that island. That’s all. The man was so desperate he ate sand. And he starved. And as he breathed his last, he thought of that little pun and it brought a faint smile to his lips.

We’ve had a run of bad luck at Brooklyn Supper lately, too. First, we had a fire in our building. Then, our renter’s insurance put us up in a hotel across from Madison Square Garden, where we had to stay for six weeks. Then, the current economic crisis punched us square in the nose. Square in the nose. Then, some dude sat outside our window and played Camptown Races on the fife(?) for a good half-hour one day. Then we got back into our apartment but we had no heat. But you know what? As bad as things have gotten, we can still eat sandwiches and not just the sand which is there.

And we really needed some sandwiches last week.

I pretty much live and die by North Carolina men’s basketball. I inherited it from my mom’s side of the family, which comes from Burlington, NC. One time I looked up my mom’s maiden name on a genealogy website and in the 1880 census, the professions listed for every single person with that name were: farmer, works on farm, farm, farming, farmwork, farms.

Those people were a little more connected to a place than I am. I’ve moved around a lot, inside the South and outside of it. I live in Big East country now, and Carolina games aren’t even always on TV, so I just have to watch the box score update on espn.com. I also have to worry that my daughter won’t grow up saying “sir” and “ma’am.” If Andy Griffith is on, I watch it, even though I never watched when I actually lived in the South. I’d probably watch Gomer Pyle, too, if that came on.

So living up north has made Carolina basketball even more important to me. Watching the Tar Heels takes me back to middle school in Greensboro, when they actually stopped class during the ACC tournament and brought bunch of us into Mr. Dillard’s class where there was a TV to watch the games. I know when I’m watching the game that my mom and dad and brother and sister and aunts and uncle and everybody are all watching, too, even if I can’t be with them.

And with my recent string of bad luck, this year’s NCAA tournament was especially important to me. I need to know that I still have some luck left in me and I needed to know that the luck ledger is going to balance out in the end. As everyone knows, you can influence the outcome of televised sporting events by doing lucky things and avoiding jinxy things. So for the tournament, I wore my unwashed and filthy (but lucky) Carolina t-shirt and my UNC hoodie (hood up at all times after the Sweet 16), put my daughter in all her UNC gear (obviously), sat perfectly still when I needed the Heels to go on a run, shouted “Brick!” at the TV when I needed the other team to miss, etc. But for the final, I felt like I need something extra. I wanted to make something lucky. And what could luckier for North Carolina than pulled pork sandwiches?

It’s wasn’t barbecue and it wasn’t Carolina style, but get off your high horse, bbq snob. Because it was awesome.

This recipe was adapted from The Lee Bros. Southern Cookbook, which is pretty much my favorite cookbook for when you’re having people over.

7 lb. (give or take) pork shoulder (we used Boston butt, but I think it would be really good with the picnic shoulder. In our case, though, you had to buy a whole picnic shoulder and that was more pork than we needed.) I got the skin removed at the butcher, but if you have skin on it, you’ll have to cut it off yourself.
28 ounce can of tomatoes
3 tsp. Hungarian paprika
2 tsp. molasses
1 tsp. honey
6 tsp. apple cider vinegar
1 medium onion, quartered
oil
salt
pepper
potato rolls
cole slaw (hopefully a friend brings this over)

Put a Dutch oven that’s going to be big enough to hold the shoulder and everything on a burner. Add the tomatoes and about half the juice. Crush the tomatoes with your hand. Hold them low in the pot because they will totally squirt juice all over the place. Add the paprika, molasses, honey, and vinegar. Put the burner on medium high. Turn it down when it all starts boiling.

Cut some of the fat off the shoulder. I made this twice. The first time was a small batch and I left most of the fat on and it made it so rich you felt like you’d just eaten Thanksgiving even though it was only a little bit. The second time, I had to cut most of the fat off to ge it to fit in the Dutch oven and i think that was the right way to go, but you can make your own decision.

Rub some salt and pepper on the pork, put some oil in a skillet and turn it to high heat. Brown the pork on all sides. Move the pork to the Dutch oven.

Cover the Dutch oven, put it in the oven and let it go for a half hour. Take it out, baste it, turn the heat down to 300. then take it out and baste again every half hour or so. Give it at least three hours in the oven, but the longer you can do it, the more awesome it will be.

When the pork is really tender and comes of the bone easily, remove it to a cutting board and let it sit for a while. Pull the pork from the bones and put it in a bowl. Set the bones aside to make broth or throw them away.

Taste the sauce and in the Dutch oven and see what you think. Add more paprika, salt, pepper, honey, whatever.

Serve the pork on potato rolls with sauce and cole slaw. Watch out because there’s probably some little bone bits in the sauce. 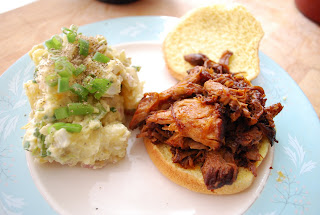