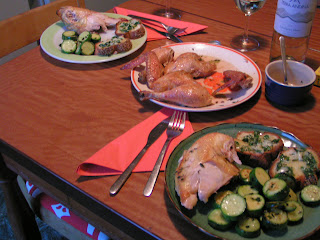 My second job was at Kenny Rogers Roasters on Route 3, which isn’t there anymore. I think it’s a barbecue place now. It was the first place I ever got a promotion. At my first job, which was at an amusement park, I was actually demoted. I started out working the water slides, but I got demoted to “area host” which means “janitor,” and I don’t mind telling you that if you never clean an amusement park bathroom, that’s a blessing you should remember the next time you’re feeling sorry for yourself.

But at Kenny Rogers Roasters I started out as a dishwasher and worked my way up to line cook. That is, I opened the pickle bucket and mixed the macaroni cheese powder with milk and put cornbread batter into giant muffin tins and things like that. From there, I became a Chicken Specialist, a move that placed me at the heart of the operation. It was the best job in the place because you came in, put the chickens on spits, put the rub on the chickens, and put the spits on the rotisserie, then you hid out for 45 minutes while they cooked trying to make sure that the manager didn’t find you and make you take out the trash or something.

I bring this up because I made roast chicken again last night and it’s something I get a little crazy about because I feel like I have some kind of professional experience roasting chickens, so I should be able to get them perfect (even though at Kenny Rogers we were under pretty specific instructions to overcook them).

We buy most of our food at the farmers’ market on Saturday, so any meat that we’re not going to eat in the early part of the week goes in the freezer. A whole chicken takes a long time to thaw and I’ve had to dry out a lot of chickens to learn that if I want to roast a chicken, I shouldn’t put it in the freezer first.

Anyway, these last two have turned out pretty well, so here’s how I did them:
– Crank the oven to 500, open a bottle of wine and pour into a glass.
– While you drink the wine, take some aluminum foil and fashion it into a ring a little bigger than the palm of your hand (assuming your hands are about the same size as mine). Place the foil ring into a cake pan. This is a lot easier to clean than a roasting pan.
– Check inside the chicken and make sure there’s not a baggie of giblets in there. Once, I didn’t and there was and we had to order in and the apartment smelled like melted baggie. Sometimes I cut up a lime and stick it up inside the chicken which smells nice while you’re cooking it and maybe helps keep it moist. Maybe not.
– I used to truss the chicken, but now I don’t bother. I just cut a little hole in the skin at the bottom of the breast and stick the ends of the drumsticks through there and I don’t worry about the wings, because who cares? More on the wings later.
– Put the chicken backside-up on the foil ring and make sure the breast isn’t touching the pan. When the oven gets up to temp or a little while before, put the chicken in and leave it for 20 minutes or so.
– While the chicken is cooking, mix some chopped herbs (I’m going through a thyme phase right now) and some salt and pepper into some olive oil. I used to use melted butter for this but I think the olive oil makes everything stick better. Also you can put some garlic in here. Or soy sauce, which makes it look really nice.
– Take the chicken out and put some of the oil on the thighs, then flip it over and put some on the breasts. If anyone is around, describe what you’re doing and see if anyone makes a “that’s what she said” joke. If no one steps up, you’ve got to do it yourself.
– Put the chicken back in the oven, let it brown for 5-6 minutes, maybe more, then turn the heat down to 325. if you haven’t already, polish off that first glass of wine. The kitchen should be totally hot by now.
– After another 15-20 minutes, pull the chicken and stick a thermometer between where the thigh and breast come together. If it’s not 165 yet, put it back in. If it is, let it sit for a few minutes if you can wait. Cut it apart and eat it. 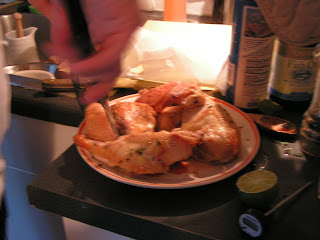 A note on chicken wings-
You may remember the show Just the Ten of Us, which was about a super Catholic gym teacher named Coach Lubbock and his wife and their eight kids. Four of the kids were teenage girls. One was really religious, two were kind of slutty, and one was artsy and didn’t believe in God. Anyway, the Coach was really worried that his daughters were going to let God down and have sex, so he was really strict about dating. One time, one of them had a potential suitor over for dinner and the dad asked him if he wanted a breast or thigh, which was a trap. You see, Coach Lubbock operated under the belief that someone who enjoyed breasts and thighs in one context would probably enjoy them in another. It’s actually a pretty fair assumption that teenage boys enjoy both chicken and the female form, even if the causality the Coach’s line of thought implies is pretty dubious. The suitor saw the trap before him and avoided it by saying he would prefer a wing. So he got to take the daughter on a date. I don’t remember what happened but I’m guessing he impregnated her.

Let me tell you, if I ever had someone over for dinner and offered them chicken I had made and they said all they wanted was a wing, I’d be pretty leery about letting them date anyone I was in a position to keep them from dating. Wings are trash. And I say that as someone who loves Buffalo wings. Every time I eat a Buffalo wing, I feel a little thrill. To live in world where we can make trash into this! But still, it’s trash. Give the wings to children. They don’t know any better.