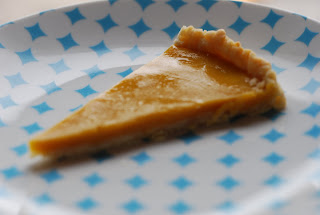 Brian and I had a friend to dinner last week and I really wanted to serve a dessert. I searched for, and tried to think of, some type of strawberry tart, but realized that I hate to cook strawberries. I think it halves the deliciousness. And so, I made a lemon tart.

You probably remember your precious tarte au citron from your careless days spent on the Rive Gauche, but I’m a little squeamish about tarts because of my nut allergy–any tart crust has serious almond potential–and I had never eaten a true tarte au citron. But I can say with a great deal of certainty that I will have one again. 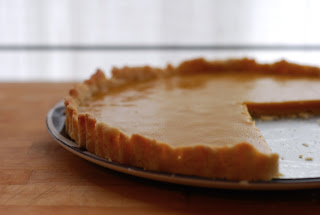 Only slightly sweet and quite tangy, this lemon tart is serious. A thin layer of bright lemon curd and a decidedly rustic crust make for a stark dessert, elegant and understated. 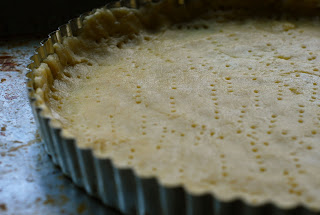 Both the crust and the filling are David Lebovitz recipes. I really followed them to the letter, so I can’t claim to have adapted anything. The crust recipe is irreverent and easy. If you are really set on making a totally flaky crust I suggest you use a more traditional recipe. If, though, you are in hurry and don’t want to fuss, this is a great recipe to have in your repertoire. Because of the tendency for prebaked crusts to overcook, I pull the crust as it is just starting to take on a pale golden hue.

The lemon curd is also a cinch to make. The only annotation I would make to the Lebovitz recipe is that I cooked the tart with the curd considerably longer, 15 minutes as opposed to 5. Mainly because undercooked eggs can make my the roof of my mouth itchy and that’s unpleasant.

The tart is best on the day it’s cooked, but, kept wrapped in the refrigerator, it’s just fine the next day. 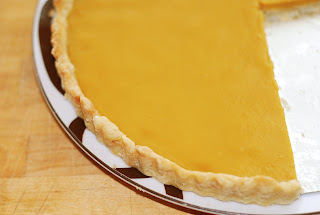