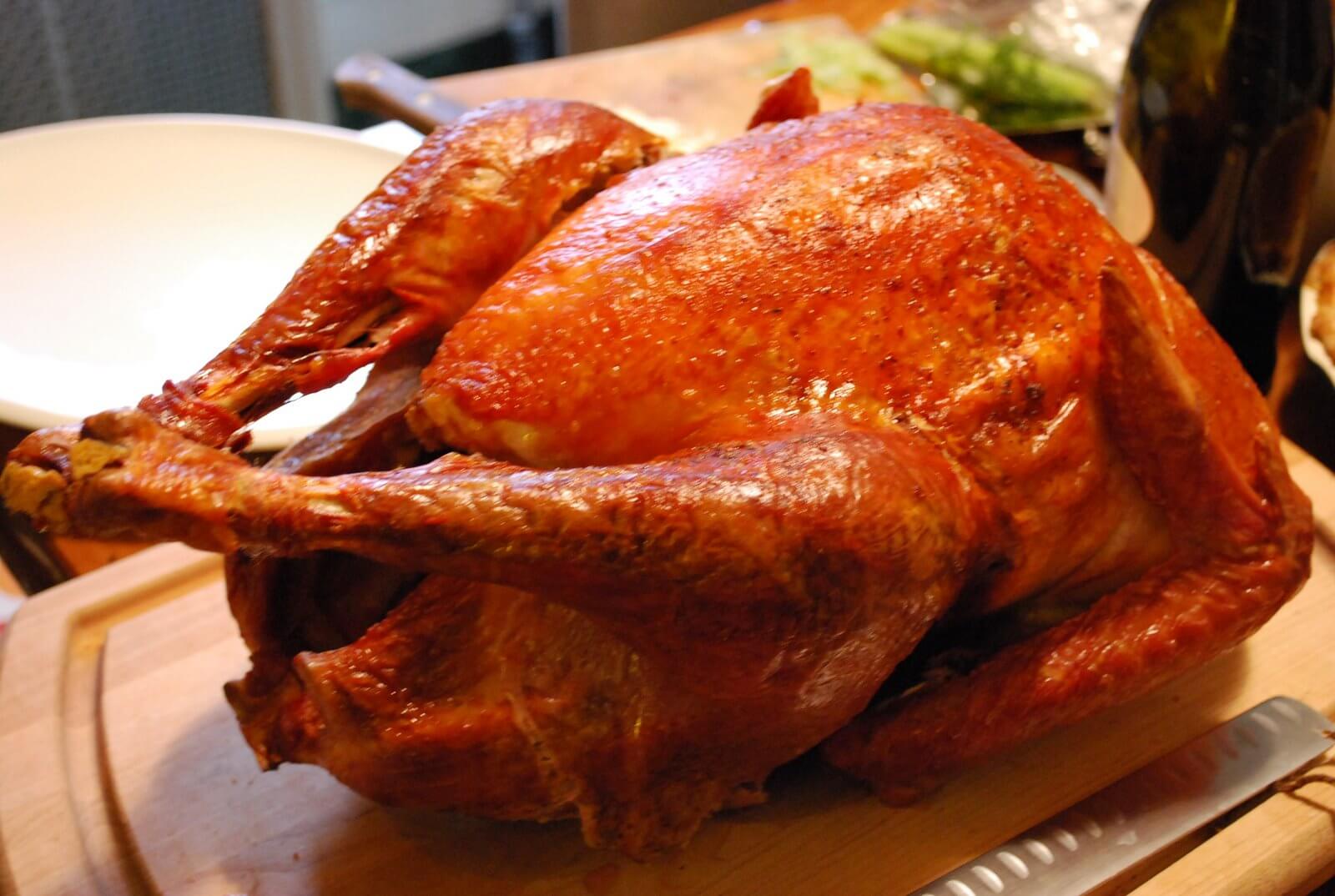 Benjamin Franklin famously wanted the turkey rather than the bald eagle to be the symbol of this great country. Similarly, he wanted people to eat bald eagles instead of turkeys at Thanksgiving. If he’d had his way, we’d probably just cut the eagle up before cooking it, because I can’t imagine how you would truss an eagle, with the wings being so long and all.

As it stands, though, we eat turkey one time and one time only during the year and that is at Thanksgiving. Sometimes you see people in Christmas commercials and movies eating turkey, but in reality, it’s just too much of a pain the ass to wash the roasting pan. That’s why Elizabeth and I do all our roasting in cake pans, which had never actually been used for making a cake until this summer. But they get used and they have some dings and discolorations that make them look like they belong to a real cook and so I can look at them and feel proud.

The roasting pan on the other hand, looks pretty much like it did when we bought it in 2004. I think that as a country, we’re looking at mirror defrosters on our Escalades, the display cases we’ve built for our She-Hulk figures, the sweaters we put on our dogs, and the elevators in our two-story homes and asking ourselves if maybe we went a little overboard with the useless junk. And that is why Thanksgiving has a significance now more than ever. It makes us feel justified in owning roasting pans.

Turkey can be kind of stressful for me because I read a lot of conflicting advice this time of year. Brine it, don’t brine it. Basting is essential, basting is a waste of time. Flip it. Don’t flip if it’s big. And since I only make it once a year, I don’t remember any lessons I learned last year.

This year, I resolved not to worry too much about it and just think of it as a big chicken. I probably roast about twenty chickens in a year, and thinking of it this way really made it seem a lot more manageable.

1 heritage breed turkey (ours was 20.5 pounds. I probably would have gotten smaller but that’s what they had and it actually wasn’t any harder to make than smaller ones we’ve done in the past and it didn’t dry out or anything so I don’t really know why people get so up tight about big turkeys. Except that if it had been any bigger it wouldn’t have fit in our roasting pan, which is sort of what the whole thing is about. Also, I’m not trying to be all hoity-toity about the bird, but this is the second year we got a heritage breed turkey and it really does taste better.)
A lot of butter, melted (I think I used a stick of butter or thereabouts)
Coarse kosher salt
Pepper

The night before Thanksgiving, take all the giblets and the neck and whatever else is in there and put it in a Tupperware in the fridge so you can make gravy with it, which we do separately because there is enough going on Thanksgiving. Rub some salt all over the turkey’s body. Cover the turkey and stick it in the fridge.

In the morning, go get some coffee and some pastries or something. You’re not going to want to add to the dishes.

Take turkey out of the fridge and put the oven on at 375 degrees F or so. We had some other stuff already baking at 350, so we did it at that. While the oven is heating up, melt the butter.

Truss turkey with twine. I think there’s probably an official way you are supposed to truss a turkey, but the important thing is to tie the feet together and tie the wings to the body and remember where you put the twine when you are done because you will probably lose it.

Place turkey breast-side down in the roasting pan and brush some of the butter on to it. Then put some salt and pepper on it and pat it with your hand.

When oven is ready, slide the turkey in. Every half hour or so, baste it. After about 1.5 hours, take the turkey out so you can flip it. The thighs should be getting pretty brown at this point. If they’re not, leave it a little longer. Flip the turkey using dishtowels. Grab the turkey on both sides using dish towels and carefully flip it end over end. Keep your hands and arms and other parts of your body clear, because a bunch of scalding hot liquid will pour out of the opening while you do this. Pour the rest of the butter over the breast and put some salt and pepper on it. Put turkey back in the oven.

Keep basting the turkey every half hour or so. Melt more butter if you need to. I don’t think you’re ever going to say “I wish I hadn’t used so much butter,” so don’t be shy with it. That goes for pretty much everything else that has butter in it.

If it looks like it’s the breast is cooking too fast and you’re worried it’s going to dry out, put some aluminum foil over the breast. When you’re almost done, take the foil off and crank the heat so the whole thing gets really brown –– about ten minutes. The turkey is done when you stick thermometer where the thigh meets the breast and it reads 165 degrees F, but I usually let it go a little bit longer just to be on the safe side.