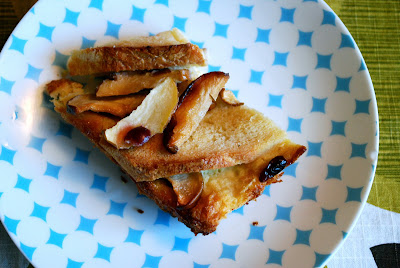 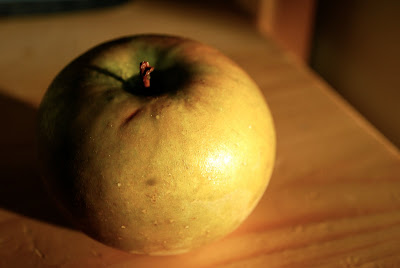 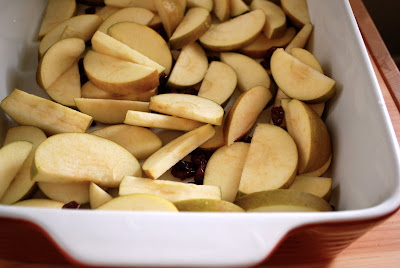 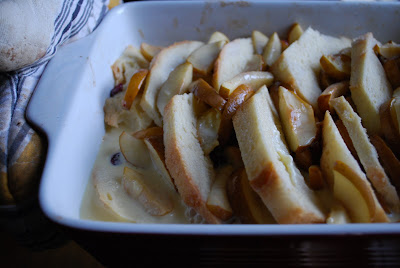 Bread pudding is the perfect fall dessert–now more than ever. Football is entering its baroque phase with rules piled upon rules; clocks that advance, stop, reverse, have seconds added and taken away; bizarre jargon in place of plain speech; and endless reviews of video. The whole enterprise screams out for something simple as a counterbalance. Something rustic. Something that calls to mind a time when if it looked like someone fumbled the football, then he fumbled the football. Something like bread pudding with apples and dried cranberries.

Brian brought back these opalescent golden green apples from the farmers’ market. I thought about pie, or even another tart, but bread pudding seemed like the way to go. I loved plum pudding so much I wanted to see if I could make a festive bread pudding with fall flavors. The plum pudding had a considerable tang, whereas this version features the quiet tones of vanilla and apple. I also cut way back on the sugar, which gives the flavor of the actual cream a voice.

So I made the bread pudding, we had friends over, ate crazy bacon mushroom cheese burgers, watched football, drank beer, and then ate this. Sadly, it was at this point that my miserable cold set in and I really have no idea what it tasted like. Luckily, they all tell my that it was really good and the vanilla and apple flavor came through.

If you are looking for an alternative to Thanksgiving standards, this is a good one because it is so forgiving. This pudding could also be a template for a general vanilla bread pudding, and could probably carry a half cup of pureed pumpkin or squash pretty well. 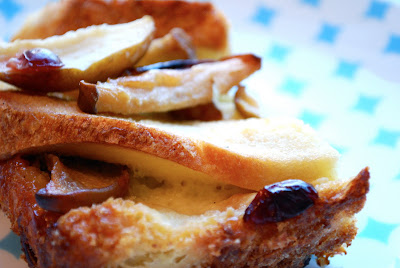 Preheat the oven to 400 degrees. Cut the apples into 1/2 inch slices. Scatter in a large baking dish somewhere around 9 x 13″. Drop bits of butter all over, scatter the cranberries, squeeze the lemon all over, and give the pan a few shakes. The American Golden Russet apples we used were quite sweet, so I did not use any sugar in the roasting. If your apples are tart, sprinkle a tablespoon of sugar over the apples. Put into the oven and roast for 15 minutes until the apples are just bubbly. Let everything cool a bit, then pull the apples and cranberries out of the pan and set aside.

Meanwhile, cut the bread slices so that each half slice will stand about 4 inches high. Butter the slices and set aside. Use a ton of a butter or just a little, it’s up to you.

In a large sauce pan heat the cream and milk. Slice the vanilla bean in half and add to the cream mixture. When it is just starting to bubble along the sides and steaming, cut off the heat and set aside for 10 minutes or so, then remove the vanilla bean. In large bowl, whisk the eggs, yolk(s) and sugar together. Whisking constantly, pour the cream over the eggs, and add a good pinch of salt.

Add a little more butter to the dish the apples were cooked in and arrange the bread so it is overlapping and at an angle (see below). Tuck the bits of apples and cranberries throughout. Slowly pour the custard over the slices. You want the bread to be almost completely covered, so add a bit of milk if you need more liquid. At this point, if you have the time, I strongly suggest you set the dish aside for 20 minutes to an hour–keep a close eye on it so you can add more liquid as it is absorbed.

Put the whole thing in the oven and bake at 350 degrees until the bread is golden and the custard has set a bit, roughly 40 minutes. Cool a while and serve. 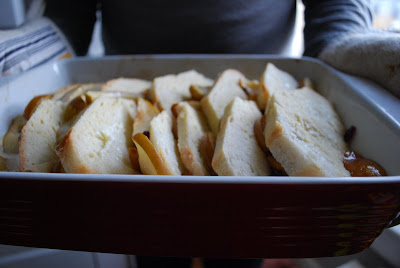