A Thanksgiving feast for two, featuring recipes for sheet pan half chicken with roasted Brussels sprouts and onions, and a simple gravy made with the pan drippings. Serve with mashed potatoes and mac and cheese, and you have the perfect Thanksgiving for two (with plenty of leftovers!). This post was created in partnership with Farmer Focus. 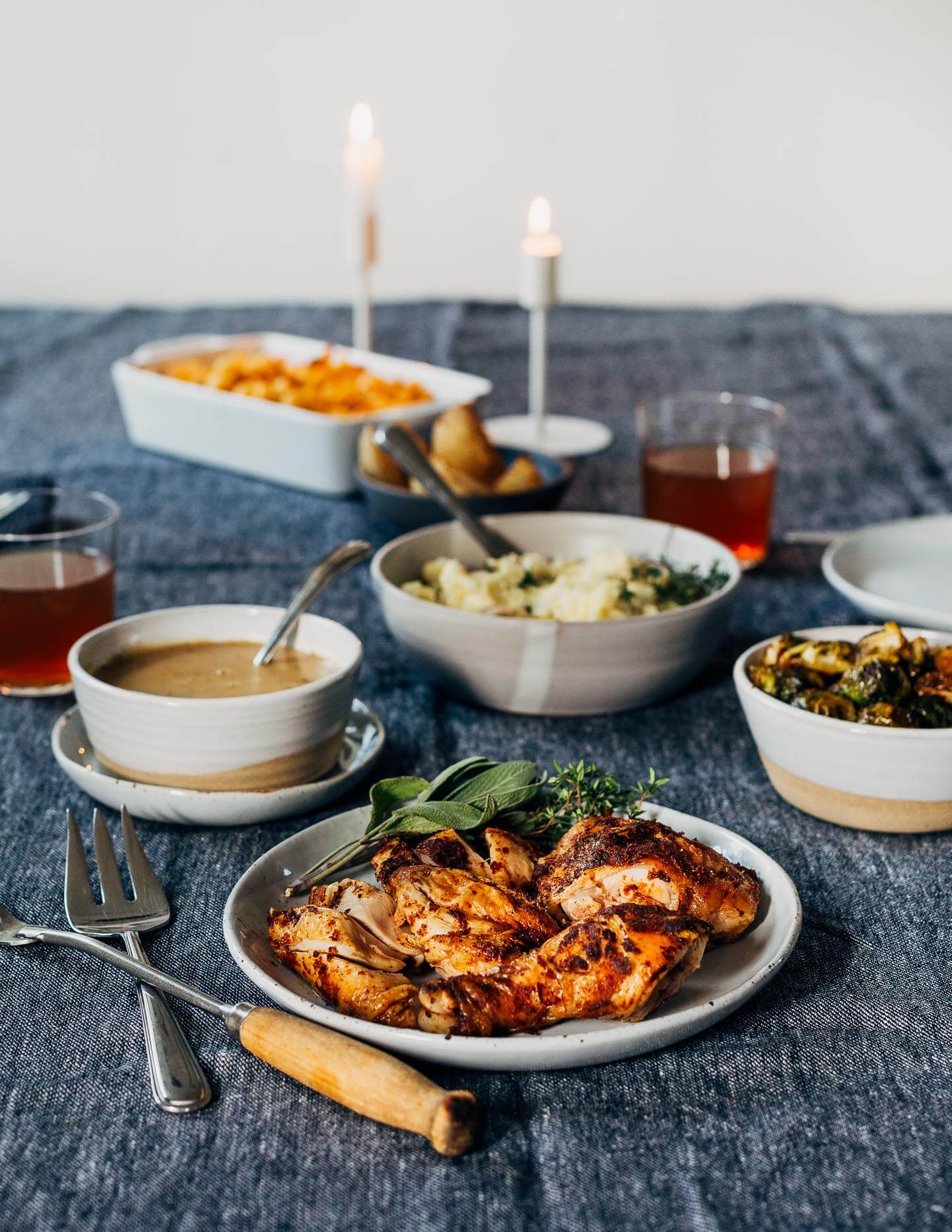 Last year’s unconventional (and decidedly smaller) Thanksgiving meal taught me that even our most precious traditions and menus don’t have to be unchanging. Our special holiday dishes come with years of nostalgia and familiarity – things I would never want to give up – but we can also reimagine old favorites to better suit our tastes and the scale of our celebration.

With that in mind, I’ve got recipes for a cozy Thanksgiving for two that’s nearly as decadent and carb-rich as a traditional feast, but with manageable portions and a few smart shortcuts that won’t have you spending the whole holiday in the kitchen. 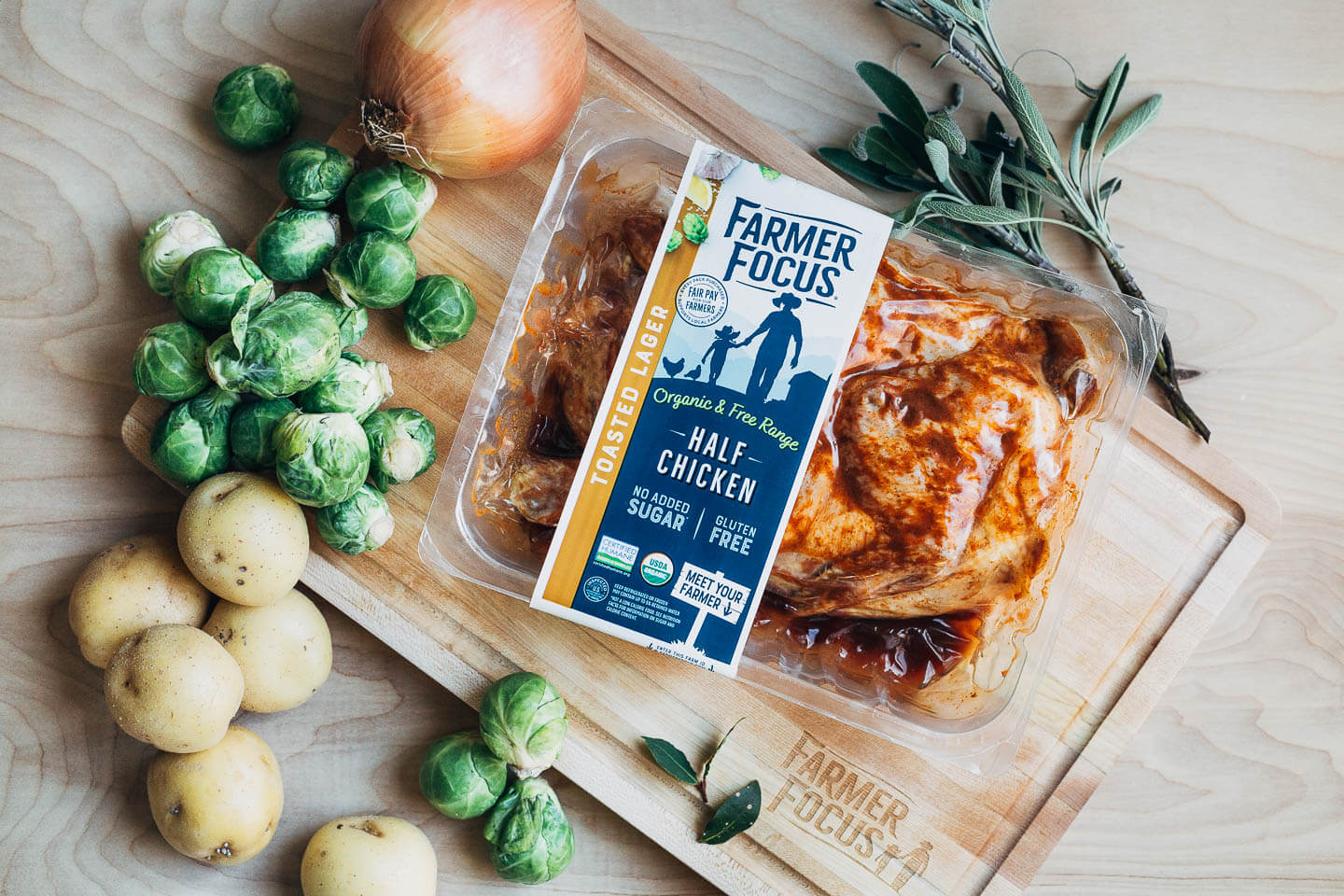 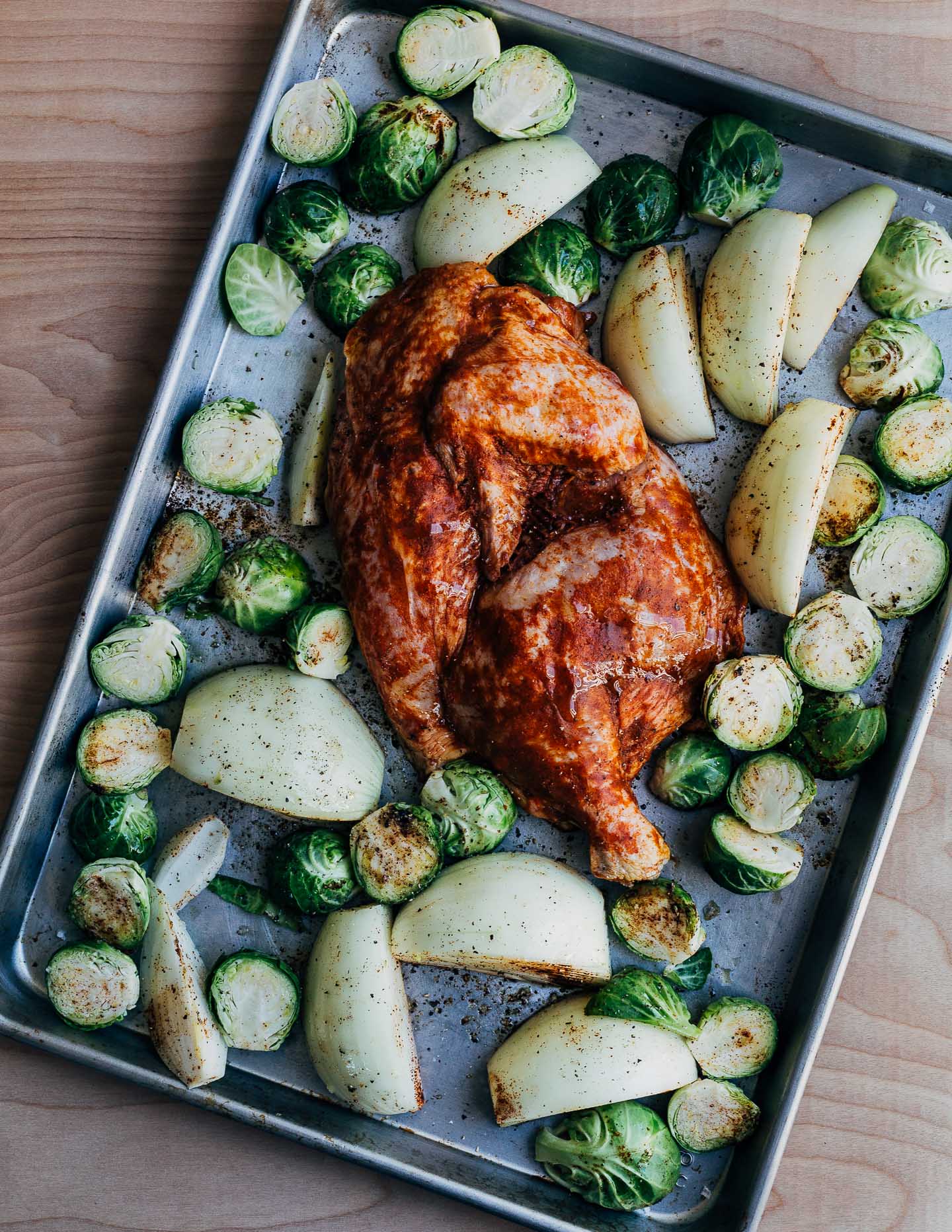 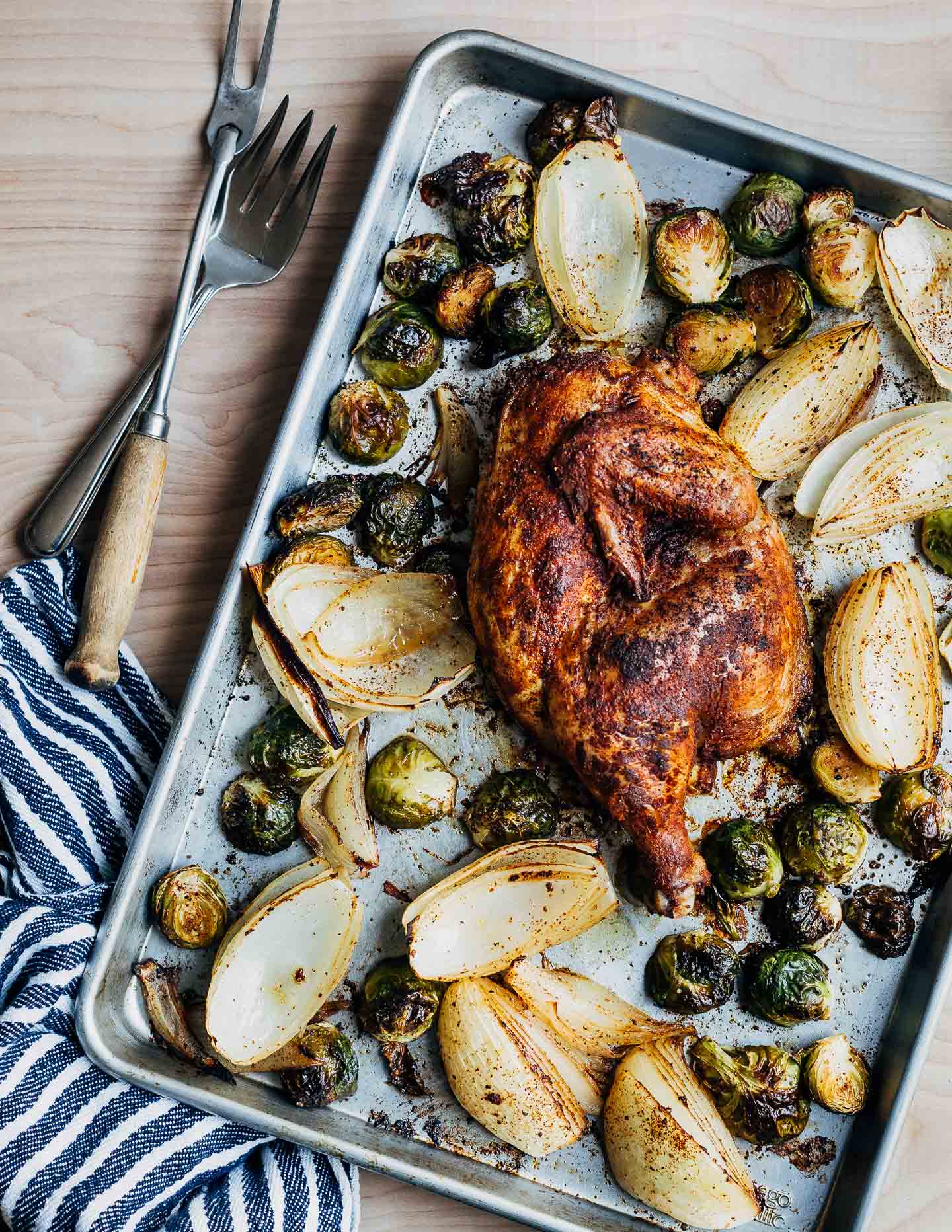 Cooking for two – even Thanksgiving dinner – doesn’t need to be complicated and this meal features a huge time-saver: pre-seasoned Toasted Lager Half Chicken from Farmer Focus. Turkeys are enormous, and seasoning and cooking one is a huge project, especially for just a couple people. A turkey breast is often presented as an alternative, but I’d suggest that this pre-seasoned half chicken is nearly effortless to cook and gives you and your guest a chance to each have light and dark meat. And you can make a lovely gravy with the pan drippings.

Featuring smoky notes of hops, paprika, garlic, and lemon, Farmer Focus pre-seasoned Toasted Lager Half Chicken is richly flavored and roasts up beautifully. There’s no need to season or salt the chicken ahead of time – Farmer Focus’s balanced seasoning has already fully permeated the meat, meaning all you’ll need to do at cook time is set the chicken on a pan, roast, carve, and enjoy!   The nutty, smoky notes of toasted lager go wonderfully with the flavors in this Thanksgiving menu. As they cook alongside the chicken, the Brussels sprouts and onions take on the flavor of the chicken. Later, some of the onion is minced and added to the pan gravy, along with all the pan drippings.

Farmer Focus recently launched a whole line of pre-seasoned offerings. Find or request the Toasted Lager Half Chicken at a retail store near you, or get it at Giant Eagle or Fresh Direct. 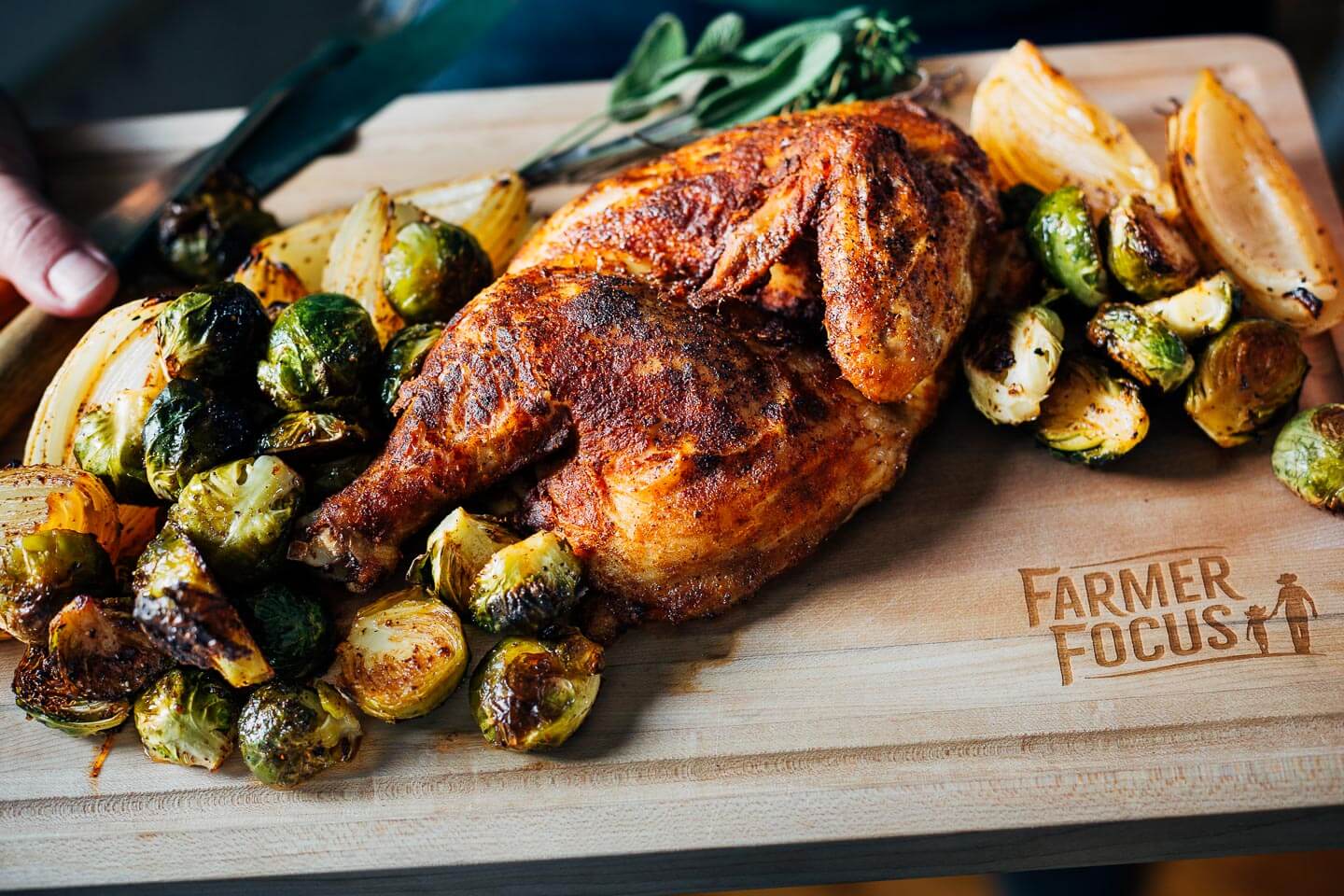 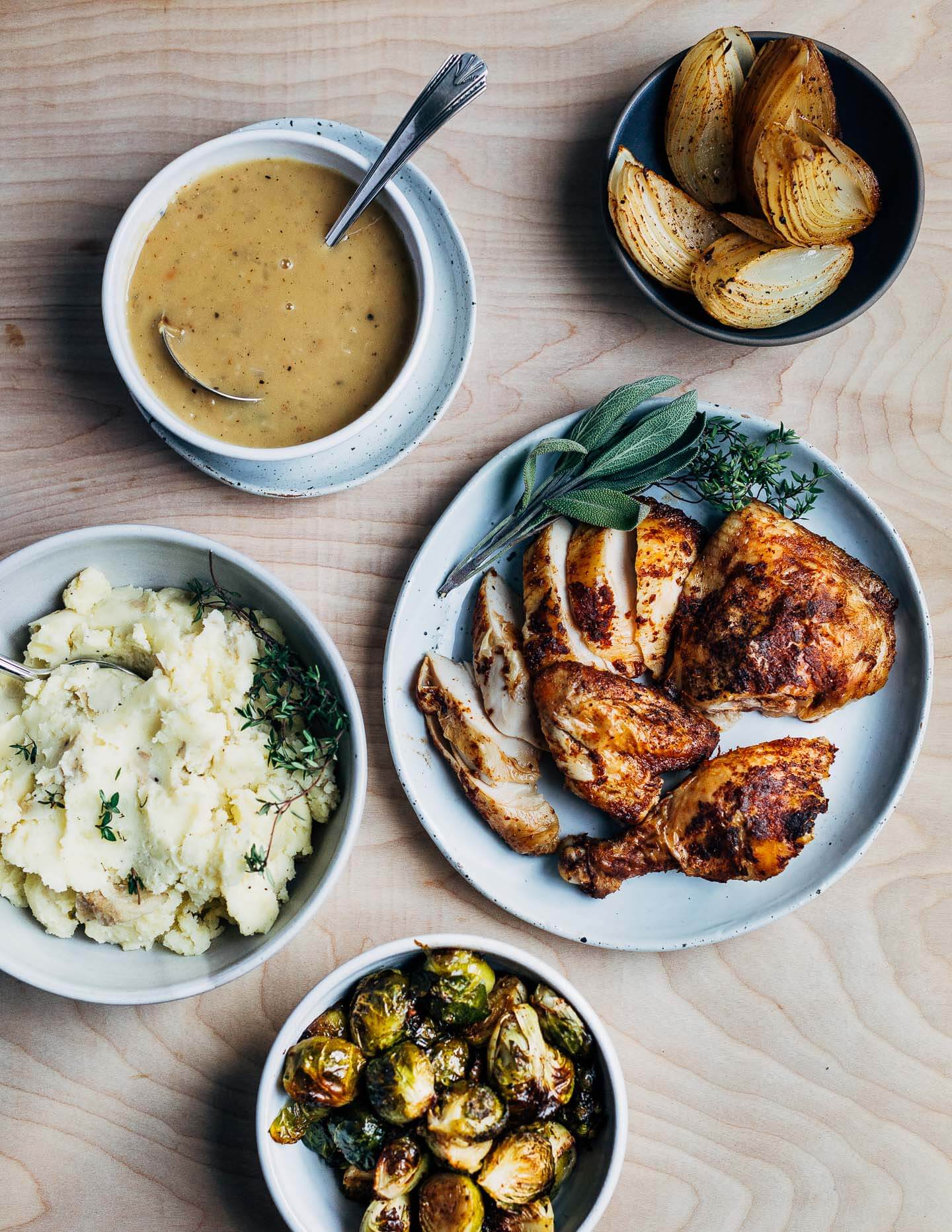 I suggest you make the sheet pan half chicken with vegetables and pan gravy detailed below alongside mashed potatoes or cauliflower puree, mac and cheese, and a big green salad.

Print Recipe
Roasted Sheet Pan Half Chicken with Brussels Sprouts and Gravy
Prep Time
15 mins
Cook Time
35 mins
A Thanksgiving feast for two, featuring recipes for sheet pan half chicken with roasted Brussels sprouts and onions, and a simple gravy made with the pan drippings. Serve with mashed potatoes and mac and cheese, and you have the perfect Thanksgiving for two (with plenty of leftovers!).
Recipe Type: Dinner
Keyword: sheet pan chicken
Makes: 2 servings
Author: Elizabeth Stark
Ingredients
Chicken and Vegetables
Gravy
Instructions