This mushroom and leek skillet chicken with a white wine pan sauce makes for a surprisingly simple weeknight meal. Seared until golden and then simmered in white wine, the vegetables are full of flavor and the chicken is perfectly crisp with tender meat. 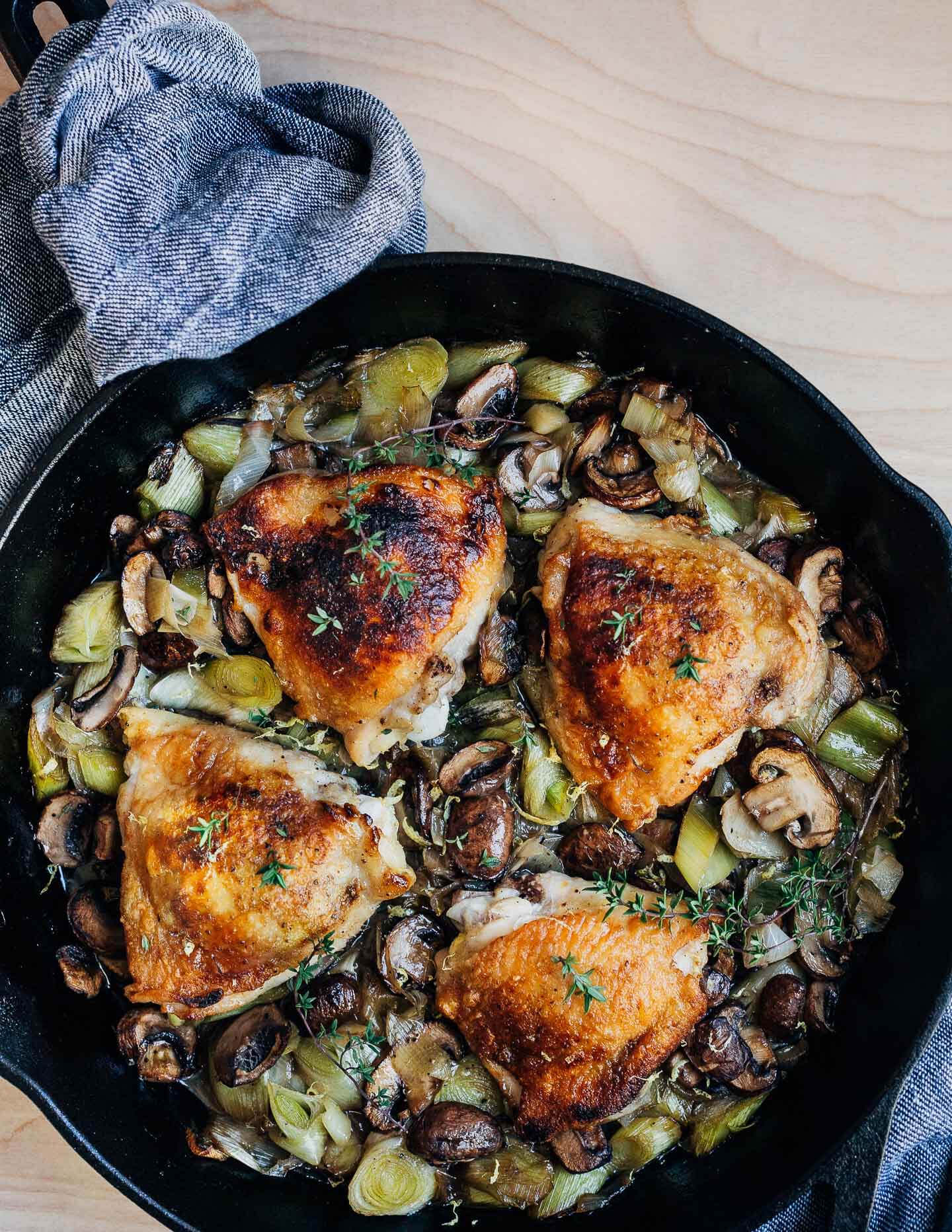 Simple, versatile skillet chicken is a mainstay of our dinner rotation. A foundation of crispy-skinned chicken and falling-off-the-bone, tender meat lends depth and deliciousness to whatever vegetables you cook alongside. Here, I went with mushrooms and leeks and loved the way both melded with the flavor of the chicken. The leeks went all supple in the schmaltz and wine, while the mushrooms came out with crisp edges and a meaty texture.

The best skillet dinners are true one-pan affairs. And while this recipe does come together in a single skillet, each element is seared separately for optimal crisping, so you’ll also need a few plates on the side. Even so, this mushroom and leek skillet chicken is easy enough for a hectic Tuesday and delicious enough for company. 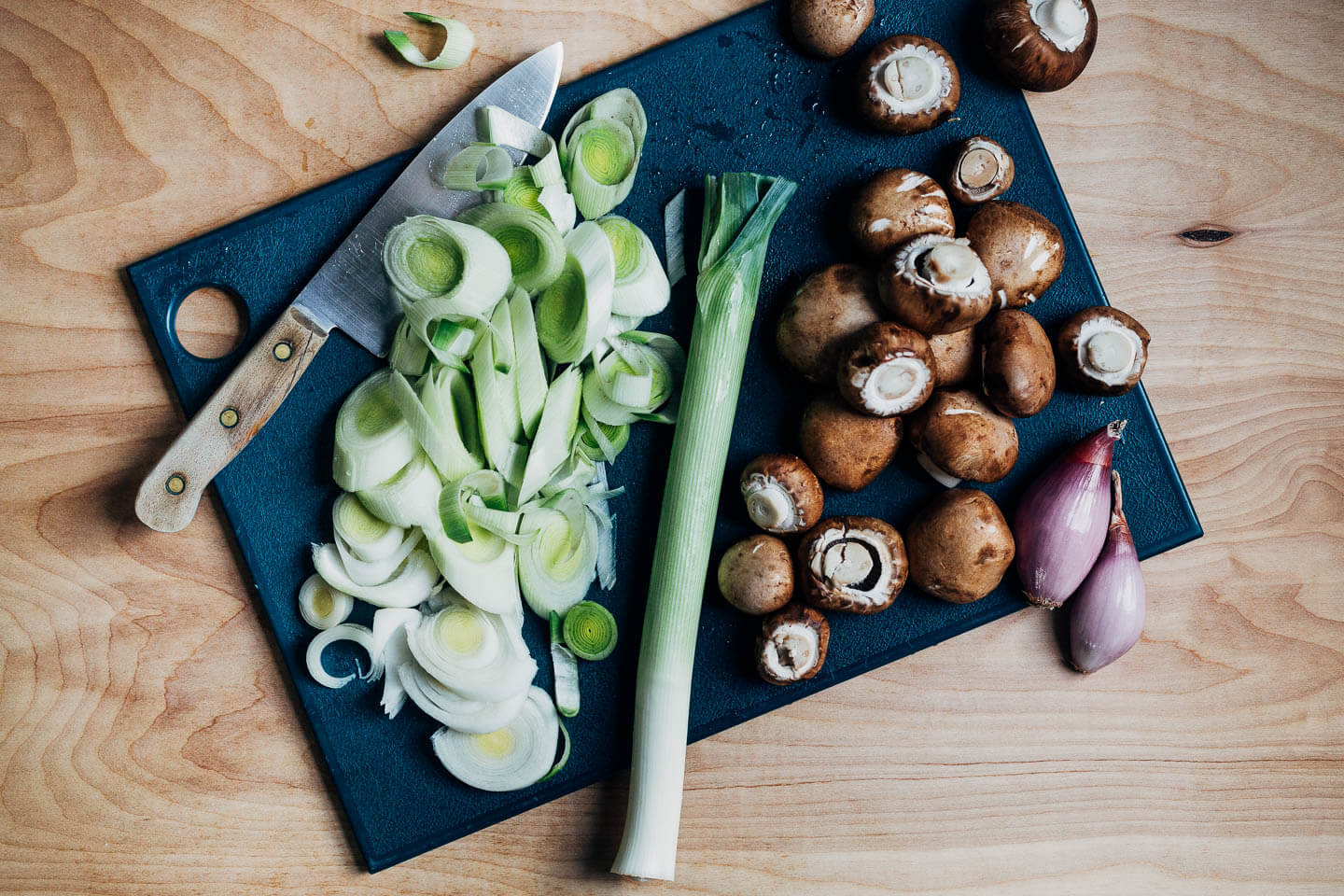 The recipe begins with bone-in chicken thighs. You can sub skinless, boneless thighs or even breast meat, just be sure to reduce both the sear and oven-roasting times. I prefer chicken thighs because the dark meat, bones, and fat, give the dish more flavor and protect the meat from drying out before it’s cooked through. And, as the chicken skin sears and crisps, the fat renders off, leaving a flavorful base for the other ingredients. 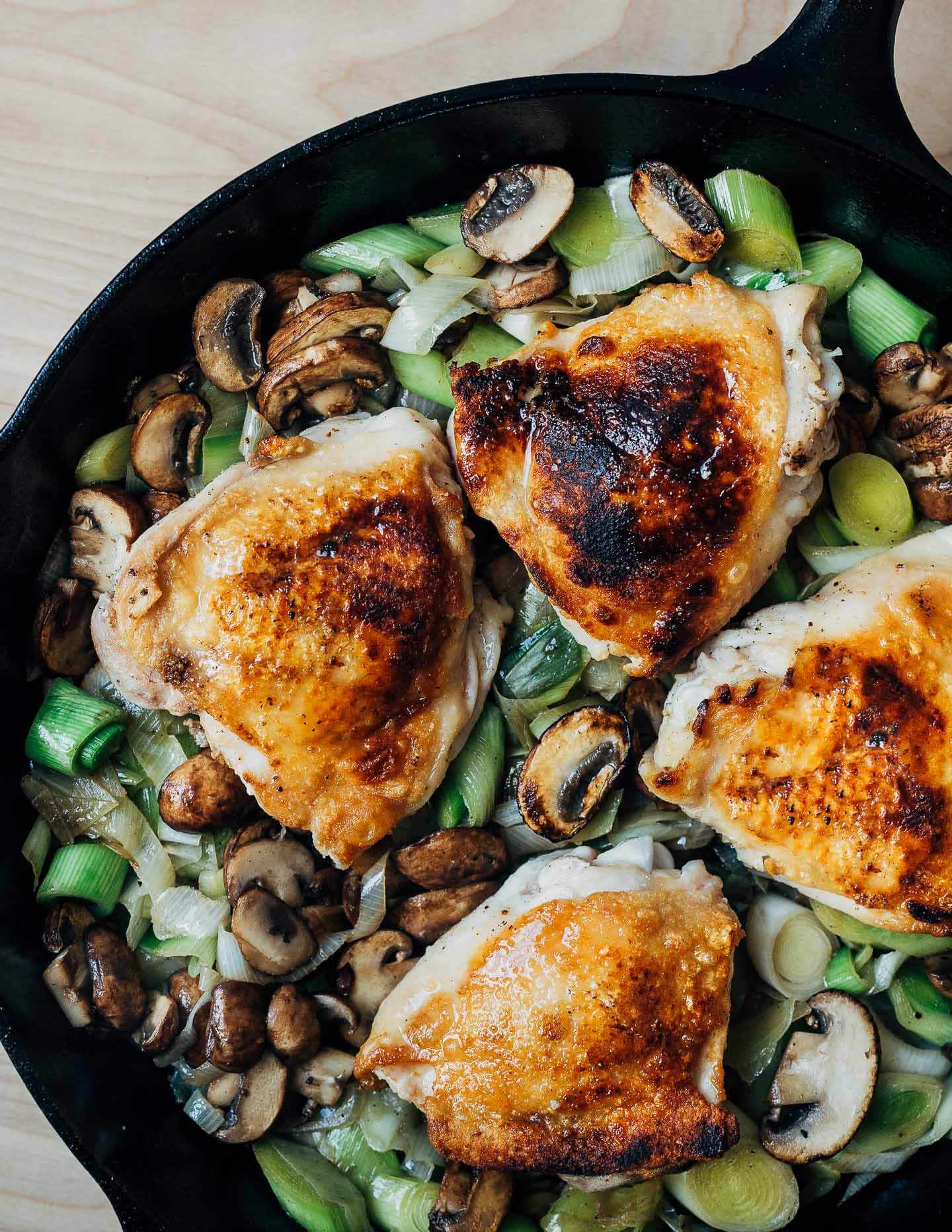 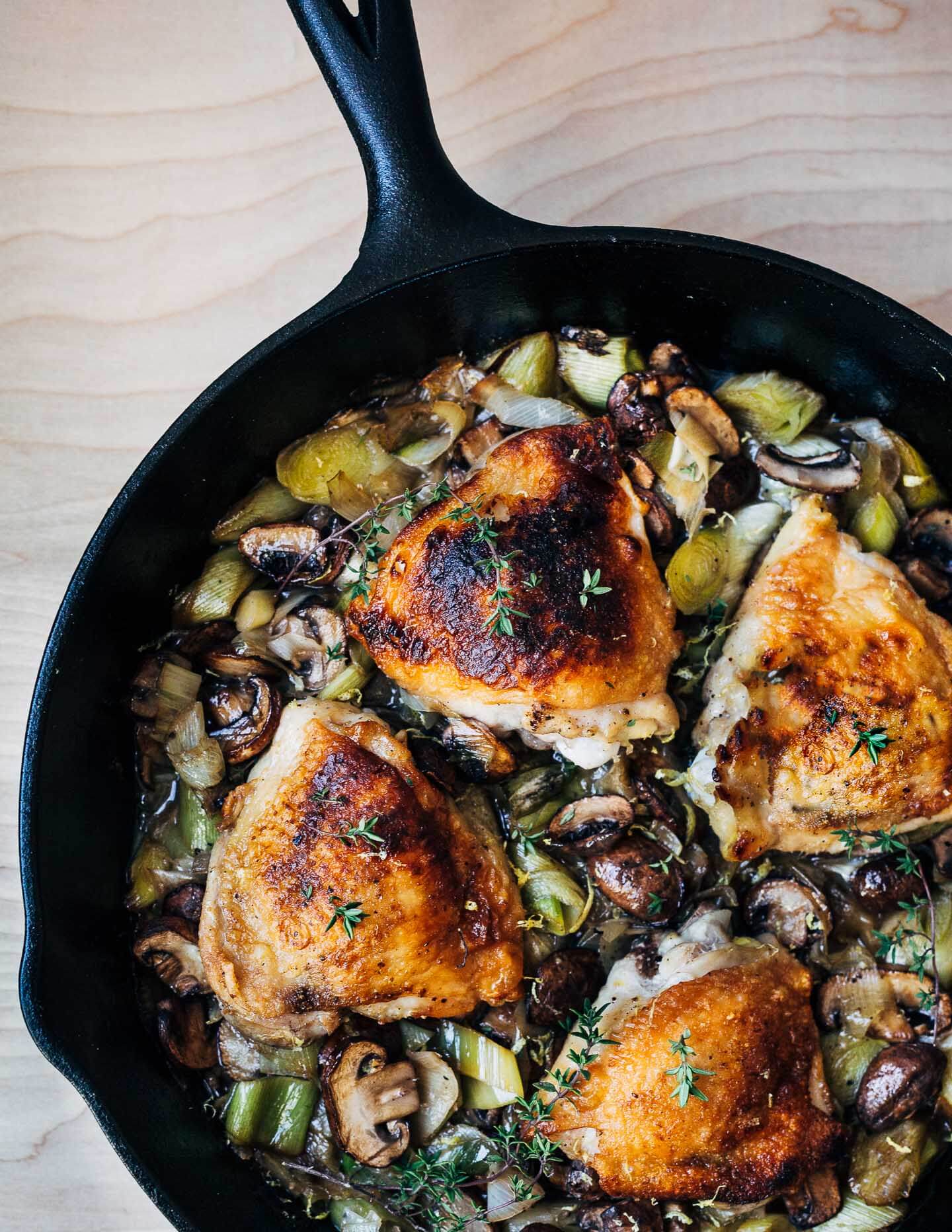 After the chicken is nice and golden, the leeks hit the skillet, absorbing flavor and fat from the chicken. The leeks will soften in the oven, so they just need a quick sear in the pan. After the they’re done, add the mushrooms. You’ll want to use thick-sliced mushrooms so they can develop a crispy sear on both sides.

Once each element is cooked, you’ll deglaze the pan with white wine and fold everything back together with the chicken thighs on top. This mushroom and leek skillet chicken comes out of the oven with meltingly tender leeks, nutty mushrooms, and golden chicken thighs. Add fresh thyme leaves and plate the dish atop your grain of choice and spoon lots of white wine pan sauce on top.

I like to serve the chicken alongside a nutty whole grain – toasted farro is my go-to, but spelt, barley, quinoa, rice, or polenta would all be tasty options. 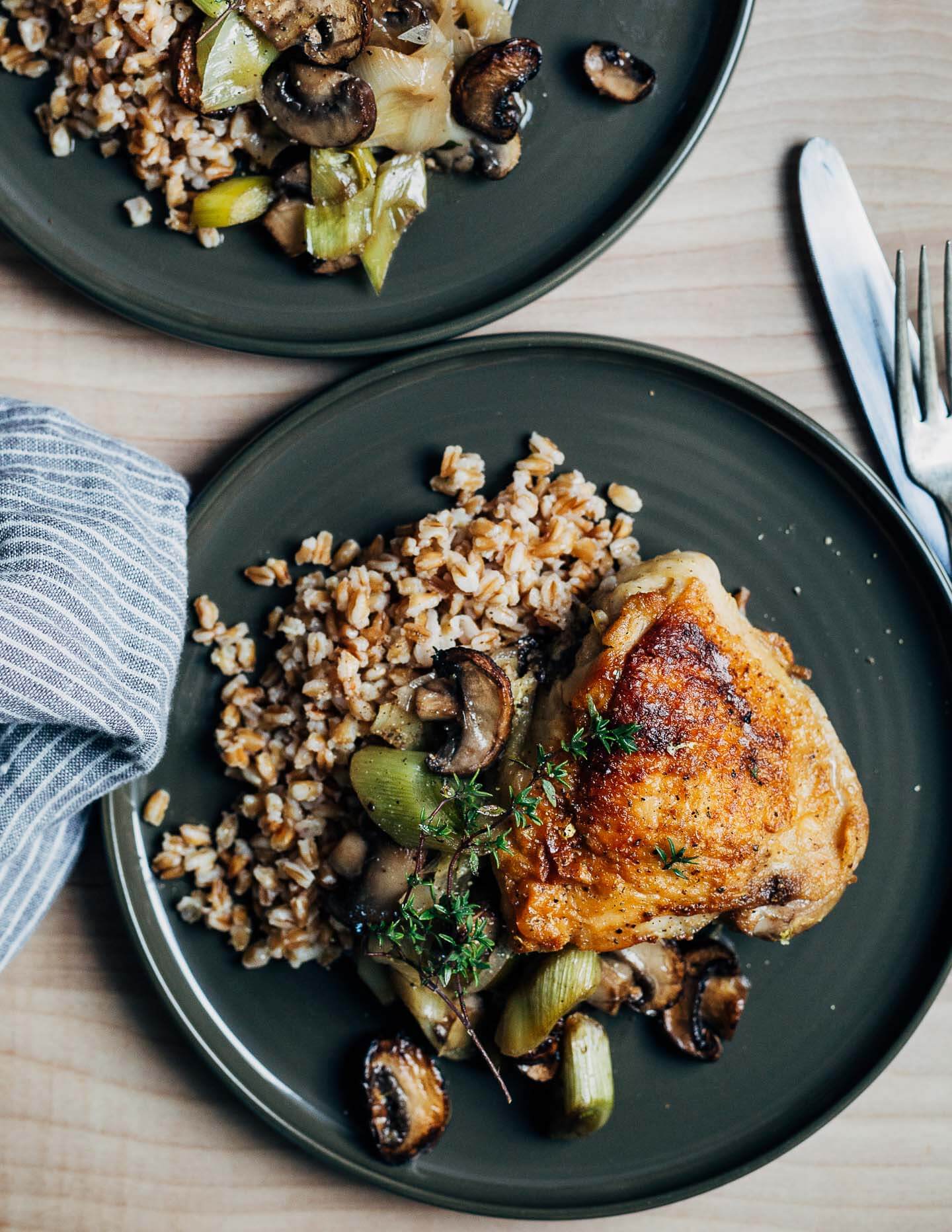 This skillet chicken recipe is also incredibly versatile. Consider adding or swapping in the following:

Check out these other weeknight-friendly skillet chicken recipes: